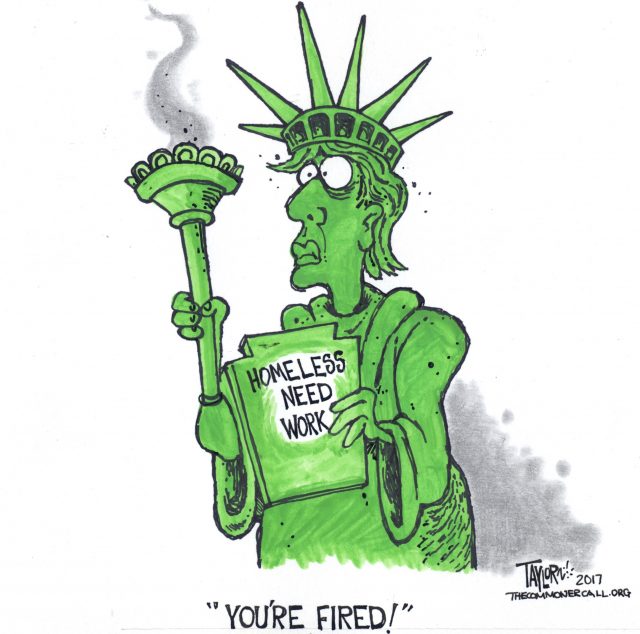 The surest mark of regime change is when they start attacking the statues.

Americans appreciate this as well as anyone – hence the carefully stage-manged toppling of Saddam Hussein in Firdos square in Baghdad in 2003. Stephen Miller, one of the key ideologues of the Trump regime, surely knew what he was doing when he took a symbolic axe to the Statue of Liberty in a heated argument with CNN’s Jim Acosta over the president’s proposals to drastically limit legal immigration.

In fairness, Miller did not attack the statue itself. A horde of boat-trip owners and Liberty impersonators would have lynched him if he did. But he did attack its meaning, and in particular the meaning ascribed to it when Emma Lazarus’s famous poem was added to its base in 1903, 17 years after the monument itself was completed. As Miller scolded Acosta: “I don’t want to get off into a whole thing about history here, but the Statue of Liberty is … a symbol of American liberty lighting the world. The poem that you’re referring to, that was added later and is not part of the original Statue of Liberty.”

Their torch is meant not to light the way, but to inflame the hatreds that are their only source of power.

Miller is factually correct, but as he put it himself, this is not really about history. It is about the contemporary resonance of Lazarus’s startling words, the only ones in which a state has appeared to invite not just any old immigrants, but the poorest of the poor: “Your tired, your poor, / Your huddled masses yearning to breathe free, / The wretched refuse of your teeming shore.” There has never been a time when the “wretched refuse” has been more visible on our screens. Miller was not engaging in literary criticism – he was making it clear that these people are not welcome in Trump’s USA.

This conflict about the meaning of a statue is part of a wider political and cultural war: it is really a conflict about the meaning of America. Lazarus – and her friends who campaigned to place her words at the base after her death – knew very well that they were engaging in a highly political act. The sculpture was intended to mark the connections between French and American republicanism by representing in a well-worn classical trope, the female embodiment of Liberty. Lazarus changed that meaning: in her poem the female figure is no longer abstract – she has a voice. And she gives herself a very different name: Mother of Exiles. The marrying of the poem to the image is a brilliant feminist coup and a devastating attack on American nativism.

And just as Lazarus changed the meaning of the statue, rightwingers have long wanted to change it back. …

“Give Me Your Tired, Your Poor”: Trump Admin Attacks Emma Lazarus’s Iconic Poem On Statue Of Liberty

Opposition is growing to the Trump administration’s new proposal to implement radical changes to U.S. immigration law and slash the number of immigrants allowed into the United States by half. The RAISE Act would create a so-called merit-based immigration system that would favor applicants who speak English, have advanced degrees or can demonstrate job skills.

On Wednesday, CNN’s Jim Acosta pressed senior policy adviser Stephen Miller over President Trump’s push to admit only English-speaking immigrants in a back-and-forth that lasted for several minutes. Acosta asked Miller about the iconic poem “The New Colossus” by Emma Lazarus that is inscribed at the base of the State of Liberty, which reads: “Give me your tired, your poor, your huddled masses yearning to breathe free.” We speak about the woman who wrote those words, Emma Lazarus, with her biographer, Esther Schor, about why Lazarus wrote the poem, how it became one of the most iconic verses about the United States and why she has long been a target of white nationalists.

In White House spokesman Stephen Miller’s verbal attack on CNN reporter Jim Acosta he used the term “cosmopolitan” to dismiss Acosta’s concerns and questions. It struck me as a little odd – why ‘comopolitan’?

It just seemed kinda’ weird; jarringly out of place.

After a little searching around I found that the use of the word is actually not weird … if you view the world through the distorted prism of the fascist Alt Right movement. The Nazis used the term ‘cosmopolitan’ to separate and marginalize – to paint as the no-good ‘other’ – Jews in the lead up to their takeover. You will also hear the modern American fascist Alt Right use the term ‘metropolitan’ in the same way.

You can learn more about Alt Right buzz words and language manipulation HERE.

Now the other important thing to understand about Miller’s attack on Acosta was his use of ‘gas lighting’ – to change the topic and throw the other person on the defensive. It is one of the classic techniques used by sociopaths and tyrants everywhere from the family dinner table to national politics. Trumpsters everywhere use gas lighting all the time.

To understand the technique link to  Gas Lighting America: How To Resist By Keeping Your Sanity In Trump’s Crazy Making America.

Stephen Colbert Updates The Statue Of Liberty Poem For The Trump  –“Give me your wealthy, your rich, your huddled MBAs yearning to be tax-free.” Link to 3-Minute Video