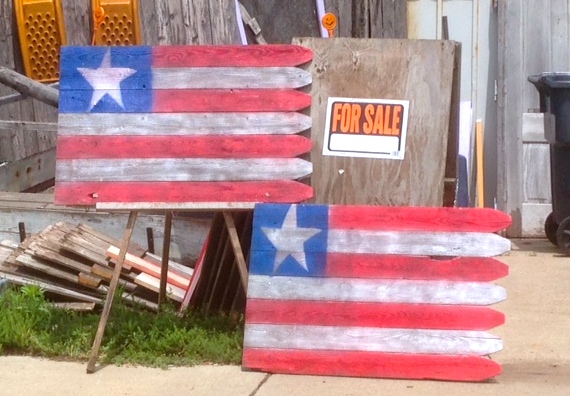 Enough.  It’s time to quit being “balanced” or “non-partisan” or whatever other euphemism the elite establishment media uses to justify ignoring the two biggest elephants in our national living room.

After Trump was elected there was a lot of concern about allowing his idiocy to become the “new normal.” But in truth, we’ve been accepting an unacceptable level of insanity in our national body politic for decades now.

Elephant Number One—and it’s a huge honking beast squatting squarely on our ottoman—is the fact that the Republican Party has come unhinged and it’s dragging us back to the Dark Ages.  Literally.  To be a Republican today you have to have complete disdain for facts, reality, empiricism, the scientific method, or any of the other underpinnings of the Enlightenment. This isn’t merely a difference between two legitimate philosophies as the press insists on portraying it—rather, it is a self-limiting time bomb which is destroying any hope of a prosperous economy or a functioning society, not to mention our country’s standing in the world and the habitability of our planet.

The evidence is overwhelming.  For starters, there’s the insane denial of climate change when records are dropping like stones.

For example, February of 2016 was an astounding 1.35 C (2.43 F) warmer than the average temperature for February based on the period from 1951 to 1980. That smashed the previous record for a monthly temperature increase by .21 C, another record.  Oh, and that previous monthly record?  It was set in January. February’s 1.35 C increase was dangerously close to the 1.5 C increase that most scientists agree is as high as we can go without incurring serious and irreversible consequences.

Meanwhile, 16 of the hottest 17 years on record have occurred since 2000. The last 3 decades have also set records for the warmest decade on record, and this decade is on track to exceed them.

Or consider that the National Snow and Ice Data center announced that in 2016 and 2015 the Arctic sea ice maximum set a record for the lowest it’s been since records have been kept, both breaking the previous record which was set—you guessed it, in 2014.

To deny the existence of climate change in the face of this kind of data is… well… irrational.  Saying so is not partisan or biased, it’s simply an accurate description of their behavior. The same is true of their position on health care, national budgets, state budgets, and tax policy. In all cases their policies are counterfactual and counterproductive.

Doubt that? Consider the collapse of the economy in Kansas after they adopted supply-side  and trickle-down-economics. Or the fact that the 3 biggest economic collapses in US history followed periods when the Republicans were in control and they’d implemented their destructive laisez-faire economic policies. Or watch as they fumble with health care, literally threatening death to hundreds of thousands in the process, and leaving 22 million more Americans uninsured.

We live in a nation controlled by corporate power and the individually wealthy. And the major press, of course, is in on the con.

But the press still covers all this in a way that is “balanced,” rather than accurate.  Oh, yes, they will often point out that the Republican “perspective” is opposed by most scientists, or that economists and health care specialists take issue with their proposals, but they don’t point out just how at odds their rhetoric is with reality. And that’s the real story here.  It’s not that there are two different perspectives on climate, or the economy, or the consequences of taxation and fiscal policies or health care. It’s that this Party is behaving as if it were literally insane.  And that should be newsworthy. Throw in Trump’s irrational, self-destructive and contradictory tweets, and the press should be running above the fold headlines, and lead stories sounding the alarm.

Which begs a question: why aren’t they?

Well, they’re wholly-owned subsidiaries of corporate America, that’s why.  And that’s who this four-decade long scam benefits, at least in the short-term.  They get to liquidate the earth and the environment for fun and profit with nothing but he-said/she-said stories from the elite establishment media.

Which brings us to Elephant Number Two – the Democrat’s embrace of the Raw deal over the New Deal. The idea that there is a Party representing the left (or the people, for that matter) in the US is ludicrous.  We have a right-wing Party representing the Oligarchy—the Democrats—and an insanely right-wing Party—the Republicans—who represent an extremist fringe of the rich, including folks like the Koch Brothers, Betsy DeVos etc.   More about this in a moment, but back to the Democrats for now.

Back before Bill Clinton brought “triangulation,” centrism, and corporatism to the Democratic Party, about half of all eligible voters claimed to be Democrats, while only about 25 percent identified as Republican. Today, only about 29 percent identify as Democrat, and too many of them don’t bother to vote because the choices are so abysmal.

Buying up the press

Now back to those rich folks who have created the right-wing revolution.  In what has been the least reported, but most important issue of our times, a group of wealthy individuals essentially purchased the press and both parties.  The bones of the takeover can be found in a memo drafted by Lewis Powell, dated August 23, 1971. In it, he outlined a systematic approach to turning the country to the right and making it more business friendly. He focused on the long term, on institution building, and on influencing education at all levels, including what kind of textbooks should be allowed. He noted that most media outlets were owned by corporations, and thus, could be made to represent the perspective of corporate America. Powell’s manifesto repeatedly used the terms “fair” and “balanced.” Ring a bell?

Of course, any good coup needs resources, and that’s where the right-wing fat cats come in. A cadre of uber-wealthy ultra-conservatives including Richard Scaiffe, Adolph Coors, the Koch brothers (as well as their father, who helped fund the John Birch Society), Alice and Jim Walton, John Olin, Lynde and Harry Bradley, and Betsy DeVos helped fund think tanks, foundations, and endowed university chairs designed to carry forward their assault on government, a mindless celebration of the free market, and a system that rewards the rich at the expense of the poor and middle class. They also fostered measures designed to initially roll back laws designed to assure the media functioned in an impartial manner and ultimately, once those laws were rolled back, to purchase it outright.

Today, there is a virtual army of think tanks who are paid to make the crazy sound sane; to lend legitimacy to the illegitimate; and to tamp down any signs of reason among the citizenry with a mixture of fear, hate, greed, blame, and xenophobia.

But the coup remains the greatest story never told, and the pretense of a left/right political dialectic goes on, with useful idiots like Democratic “strategist” Mark Penn suggesting we take the middle ground between the extreme right wing, and the merely right wing, compromising ourselves into the Dark Ages.