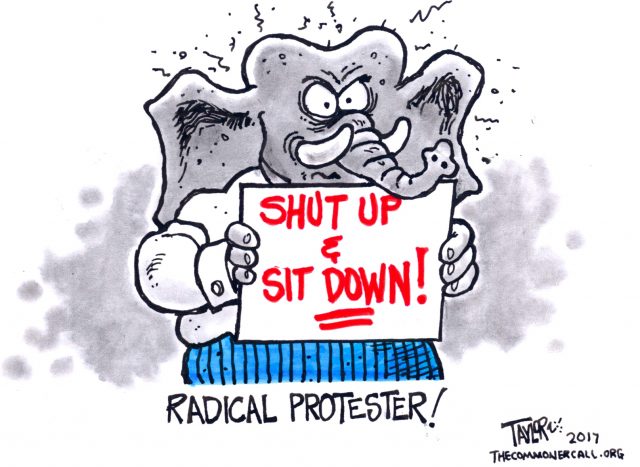 In his committed mendacity, his nostalgia for the 1930s, and his acceptance of support from a foreign enemy of the United States, a Republican president has closed the door on conservatism and opened the way to a darker form of politics: a new right to replace an old one.

Conservatives were skeptical guardians of truth. The conservatism of the 18th century was a thoughtful response to revolutionaries who believed that human nature was a scientific problem. Edmund Burke answered that life is not only a matter of adaptations to the environment, but also of the knowledge we inherit from culture. Politics must respect what was and is as well as what might be. The conservative idea of truth was a rich one.

“If Republicans do not wish to be remembered (and forgotten) like the German conservatives of the 1930s, they had better find their courage – and their conservatism – fast.”

Conservatives did not usually deny the world of science, but doubted that its findings exhausted all that could be known about humanity. During the terrible ideological battles of the 20th century, American conservatives urged common sense upon liberals and socialists tempted by revolution.

The contest between conservatives and the radical right has a history that is worth remembering. Conservatives qualified the Enlightenment of the 18th century by characterizing traditions as the deepest kind of fact. Fascists, by contrast, renounced the Enlightenment and offered willful fictions as the basis for a new form of politics. The mendacity-industrial complex of the Trump administration makes conservatism impossible, and opens the floodgates to the sort of drastic change that conservatives opposed.

Thus the nostalgic moment for this White House is not the 1950s, usually recalled warmly by American conservatives, but the dreadful 1930s, when fascists of the new right defeated conservatives of the old right in Europe. Whatever one might think of conservative nostalgia for the 1950s, it is notable for what it includes: American participation in the second world war and the beginnings of the American welfare state. For conservatives, it all went wrong in the 1960s.

For the Trump administration, it all went wrong rather earlier: in the 1940s, with the fight against fascism and the New Deal. …

No Country for Old Republicans

This is a smash and grab of our republic underway in full view.

Ethan and Joel Coen’s 2007 cinematic masterpiece No Country for Old Men, like all classics, is considered a significant work of art because it paints a compelling portrait of the human condition.

The film’s two central protagonists are Llewelyn Moss (Josh Brolin) and Anton Chigurh (Javier Bardem). It is in Llewelyn, however, that perhaps we best see ourselves and are forced to ask deep questions about the decisions we make.

The plot revolves around a drug deal gone bad in the West Texas desert. Llewelyn, out hunting, stumbles upon a scene of human carnage, the aftermath of a gunfight that presumably erupted when the transporters, sellers of Mexican heroin, and their buyers jumped the gun, literally leaving almost no one alive.

Putin’s Godfatherly embrace of Trump, his family, and his wide circle of supporters constitutes a right-here, right-now, live, active national security threat to the United States.

As he stands amid the corpses, weapons, and drugs, Llewelyn’s alarm is palpable. He takes on the demeanor of a wild animal, senses alive, on high alert. He won’t touch the drugs, he takes one handgun from the grasp of a dead man, and then he sees the suitcase with the two million dollars in cash. Heroin he wants no part of, he doesn’t understand it. But the money has his attention. After all, money is money, right?

Off he goes, suitcase in hand, with more money than he has ever seen and more trouble than he will be able to stop. The cartels, armed with automatic weapons, come looking for the drugs or the money, and a brilliantly psychopathic Chigurh, played by Bardem, comes looking for the money on behalf of the American buyers.

The beleaguered and overmatched lawman, Sheriff Ed Tom Bell, played by Tommy Lee Jones, tasked with restoring law and order, at one point goes to his uncle Ellis, played by Barry Corbin, a retired Sheriff himself, and asks for advice. The warning he gets is ominous: “You cain’t stop what’s coming.” Indeed, what is coming is a trail of violence and bloodshed that the quiet desert communities in the area are totally unprepared for. In the end Llewelyn, his wife, and a number of others are murdered.

Mitch McConnell, Paul Ryan, and their supporters have a problem not unlike Llewelyn’s. They’re off down the road with a bag of ill-begotten political currency, and there’s a crime scene they’re running from.

Talking heads while talking often speak of Putin’s interference in 2016 U.S. presidential election in the past or future tense. “It happened at that time … and we don’t want it to happen next time.” Seemingly oblivious to the three-ring circus of foreign influence and national security degradation unfolding before their eyes.

Putin’s Godfatherly embrace of Trump, his family, and his wide circle of supporters constitutes a right-here, right-now, live, active national security threat to the United States. This is a smash and grab of our republic underway in full view.

When Donald Trump as president opens up the Oval Office to the Putin regime or snubs the NATO Alliance, he is recklessly ignoring the advice of every national security expert in the Western world. When Trump contemptuously refuses to reveal his business dealings or financial dealings with Putin’s circle of oligarchs, he is leaving the door wide open for massive corruption and betrayal of his oath as President.

Of equal cause for alarm is what the Republicans themselves are buying with Putin’s currency. A new “conservative Supreme Court Justice,” no problem. The destruction of the U.S. healthcare system for the benefit of the wealthiest one percent, of course. Putin’s currency spends well.

Evan McMullin, writing for the Washington Post, opined, Republicans are Risking Becoming the Party of Putin. Consider that done. There is still the matter of the bag of illicit currency and its consequences.

Like the Sheriff said, “You cain’t stop what’s coming.”