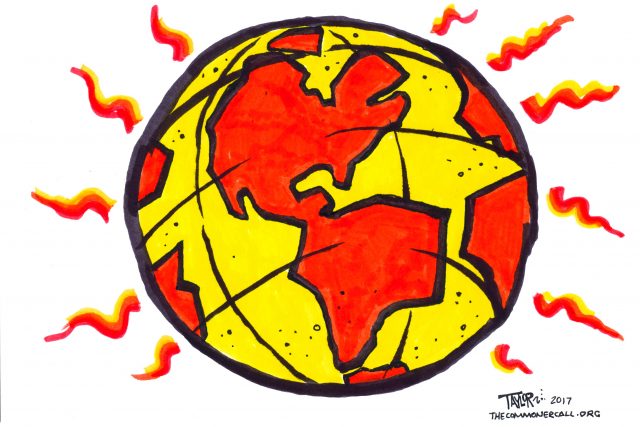 (Editor’s Note: Ok, yes, this is a hard story to read, but it really is the most important one you can read this month. There is a concept in Buddhist psychology called ‘radical acceptance’. It is not acceptance that a situation is okay and should just be tolerated, but instead that, yes, things are as bad as they appear and that is the starting point to needed change. This article is an essential dose of radical acceptance for us all. – Mark L. Taylor)

It is, I promise, worse than you think. If your anxiety about global warming is dominated by fears of sea-level rise, you are barely scratching the surface of what terrors are possible, even within the lifetime of a teenager today. And yet the swelling seas — and the cities they will drown — have so dominated the picture of global warming, and so overwhelmed our capacity for climate panic, that they have occluded our perception of other threats, many much closer at hand. Rising oceans are bad, in fact very bad; but fleeing the coastline will not be enough.

Indeed, absent a significant adjustment to how billions of humans conduct their lives, parts of the Earth will likely become close to uninhabitable, and other parts horrifically inhospitable, as soon as the end of this century.

“But no matter how well-informed you are, you are surely not alarmed enough.”

Even when we train our eyes on climate change, we are unable to comprehend its scope. This past winter, a string of days 60 and 70 degrees warmer than normal baked the North Pole, melting the permafrost that encased Norway’s Svalbard seed vault — a global food bank nicknamed “Doomsday,” designed to ensure that our agriculture survives any catastrophe, and which appeared to have been flooded by climate change less than ten years after being built.

The Doomsday vault is fine, for now: The structure has been secured and the seeds are safe. But treating the episode as a parable of impending flooding missed the more important news. Until recently, permafrost was not a major concern of climate scientists, because, as the name suggests, it was soil that stayed permanently frozen. But Arctic permafrost contains 1.8 trillion tons of carbon, more than twice as much as is currently suspended in the Earth’s atmosphere. When it thaws and is released, that carbon may evaporate as methane, which is 34 times as powerful a greenhouse-gas warming blanket as carbon dioxide when judged on the timescale of a century; when judged on the timescale of two decades, it is 86 times as powerful. In other words, we have, trapped in Arctic permafrost, twice as much carbon as is currently wrecking the atmosphere of the planet, all of it scheduled to be released at a date that keeps getting moved up, partially in the form of a gas that multiplies its warming power 86 times over.

Maybe you know that already — there are alarming stories every day, like last month’s satellite data showing the globe warming, since 1998, more than twice as fast as scientists had thought. Or the news from Antarctica this past May, when a crack in an ice shelf grew 11 miles in six days, then kept going; the break now has just three miles to go — by the time you read this, it may already have met the open water, where it will drop into the sea one of the biggest icebergs ever, a process known poetically as “calving.”

But no matter how well-informed you are, you are surely not alarmed enough. Over the past decades, our culture has gone apocalyptic with zombie movies and Mad Max dystopias, perhaps the collective result of displaced climate anxiety, and yet when it comes to contemplating real-world warming dangers, we suffer from an incredible failure of imagination. …

The window for effective action is very short, probably two or three decades at most.

A new study published in the Proceedings of the National Academy of Sciences on Monday argues based on “current trends of population declines and extinctions” that we are currently witnessing Earth’s “sixth mass extinction.”

When considering this frightening assault on the foundations of human civilization, one must never forget that Earth’s capacity to support life, including human life, has been shaped by life itself. When public mention is made of the extinction crisis, it usually focuses on a few animal species (hundreds out of millions) known to have gone extinct, and projecting many more extinctions in the future. But a glance at our maps presents a much more realistic picture: they suggest that as much as 50% of the number of animal individuals that once shared Earth with us are already gone, as are billions of populations. Furthermore, our analysis is conservative, given the increasing trajectories of the drivers of extinction and their synergistic effects.

The scientists suggest that while multiple factors have contributed to the “biological annihilation” that has accelerated rapidly in recent decades, “the ultimate drivers” are “human overpopulation and continued population growth, and overconsumption, especially by the rich.”

Given that “the sixth mass extinction is already here” and not merely a dire possibility to be guarded against in the distant future, “the window for effective action is very short, probably two or three decades at most,” the scientists write.

“All signs point to ever more powerful assaults on biodiversity in the next two decades, painting a dismal picture of the future of life, including human life,” they conclude.

Acknowledging the warnings of researchers wary of “overstating the science in a way that presents the problem as unsolvable,” Ceballos, Ehrlich, and Dirzo insist that their dire message is an urgent call to action, not an expression of doom-and-gloom defeatism.

Ehrlich, speaking with the Guardian, argued that the use of “strong language” is in this case warranted by the science.

“The serious warning in our paper needs to be heeded because civilization depends utterly on the plants, animals, and microorganisms of Earth that supply it with essential ecosystem services ranging from crop pollination and protection to supplying food from the sea and maintaining a livable climate,” he said.

“The time to act is very short,” Ceballos added.

Doomsday Climate Change Narratives Don’t Work. But Here’s What Does

The title of David Wallance-Wells’ recent essay in New York Magazine is catchy, if not uncomfortable. “The Uninhabitable Earth: Famine, economic collapse, a sun that cooks us: What climate change could wreck – sooner than you think.”

The article asks us to peer beyond scientific reticence into a doomsday future. The accounts of mass heat deaths in cities and praying for cornfields in the tundra is disturbing, but they’re familiar. It’s the same frame for how we talk about a much more immediate climate change disaster – American communities at risk to sea level rise today.

We’ve labeled Shishmaref, Alaska, a community that voted to relocate because of climate change impacts last August, a “tragedy of a village built on ice.” We’ve marketed Isle de Jean Charles, Louisiana, the first US town to receive federal funding to relocate, as climate change refugees watching their town slip into the sea. And we ask “Should the United States Save Tangier Island From Oblivion?” on the Chesapeake Bay island’s future.

It’s possible to be hopeful for tomorrow even when things seem hopeless now.

Each of these follows a recognizable storyline: a vanishing island, a culture slipping away, and an ensemble of characters unsure of what their future holds. Each piece tells a cookie cutter version of a vulnerable village in fear of rising tides and residents as victims on the front lines of climate change.

These doomsday narratives are wrong, and they are dangerous.

Telling and sharing stories, from the scientific to the personal, is one the most important tools we have to survive climate change.

Stories help us to share facts, knowledge, and experiences about the causes and effects of a warming world. But more than just educational tools, stories are how we make sense of the world we live in. The story you read in the newspaper or the documentary you watch on Netflix holds the immense ability to shape what we see and don’t see. Those visibilities and invisibilities shift our perspectives. And it’s those perceptions upon which we base our actions. …