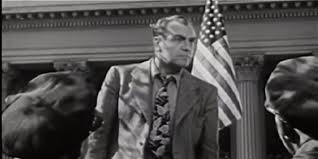 “A nation of suckers.”

I stumbled across a poignant little film put out by the United States War Office in 1947 called Don’t Be A Sucker” that was a warning against domestic fascism. Fresh off the devastating tragedy of World War II there was a worry that the ever present currents of American fascism could replicate and metastasize into what had recently occurred in Europe.

Don’t Be A Sucker does a quaint but excellent job of briefly explaining the dangers of fascism and how fascists had been able to drive wedges between the German people – turning German against German – by exploiting stereotypes, racial prejudice, fear and economic need. It then portrayed the same thing happening in America. It is a 17-minute gift from a more awakened and enlightened time of both education and warning.

I referred to the film as “poignant” in that you can’t imagine the current government of Donald Trump and the Republican party permitting an official message anything like Don’t Be A Sucker today. The film includes what can only be seen as aspirational imagery of a tolerant America. Despite that overly naive and rosy portrayal of American tolerance then, this 70 year-old government film actually provides a pithy assessment of where we are today. The very divisive and duplicitous forces profiled in Don’t Be A Sucker are now running the show. What was warned is now both unofficial and rapidly becoming official government policy. Despite the warnings of the past we indeed have been played and are now in real danger of becoming a nation of suckers.

This short film is worth the watch as both a lesson of history and update on where we are now and a reminder of hard earned lessons of the past.

(Commoner Call article by Mark L. Taylor, 2017. Open source and free to use with link to www.thecommonercall.org )

Donald Trump’s speech in Poland may have attempted to camouflage its Fascist undertones with some Nazi-bashing, but no one will be fooled. The speech was probably shaped by alt-Neo-Nazi Steve Bannon, White House strategist and enabler of the white supremacist roll of toilet paper known as Breitbart.

Like all Fascist speeches, it configured the Fatherland as weak and a laughingstock, threatened imminently with being wiped out. It is this paranoia and poor self-image that drives Fascist aggression. So Trump said,

“We have to remember that our defense is not just a commitment of money, it is a commitment of will. Because as the Polish experience reminds us, the defense of the West ultimately rests not only on means but also on the will of its people to prevail and be successful and get what you have to have. The fundamental question of our time is whether the West has the will to survive. Do we have the confidence in our values to defend them at any cost? Do we have enough respect for our citizens to protect our borders? Do we have the desire and the courage to preserve our civilization in the face of those who would subvert and destroy it?”

Trump’s values vs our values

What this paragraph means by values is not the same as what Americans mean by values. We mean the Bill of Rights. Trump means the Religious Right. We mean a decent life for everyone, with health care a basic human right. Trump means plutocracy, an America of, by and for the multi-millionaires and billionaires. We mean tolerance and pluralism. Trump means racism against brown and black people. He again defended his Muslim ban, even though no one from any of the 6 Muslim-majority countries on his boycott list has launched a terrorist operation here in the twenty-first century. He is lauding Poles not because of their cultural achievements but because this are configured as the achievements of white people. …