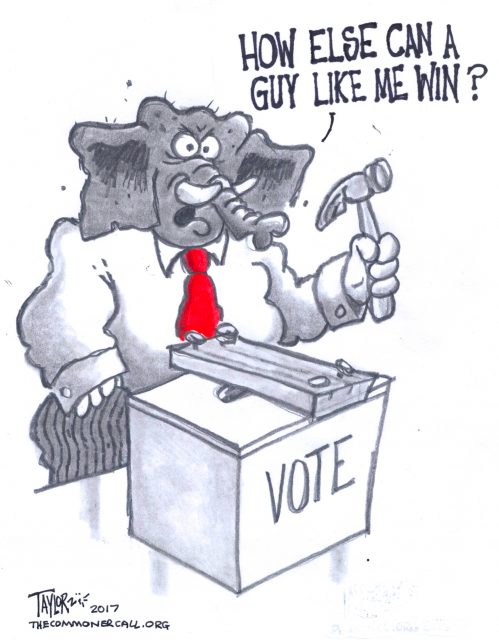 Voting and civil rights advocates are ringing alarm bells on Thursday after it was learned that an election commission established by Donald Trump—one which critics feared from its inception would be used to suppress, not protect, voter access—had sent requests to all fifty states demanding personal and detailed information about voters.

According to The Hill, a letter was sent from Kris Kobach, the Secretary of State in Kansas and vice chairman of Trump’s Presidential Advisory Commission on Election Integrity, asking the states for “several pieces of information about voters, including their names, birthdays, the last four digits of their Social Security numbers and their voting history dating back to 2006.”

The Lawyers’ Committee for Civil Rights Under Law, a civil rights and voting protection watchdog, described the move as dangerous and called on states receiving the request not to comply.

‘This meritless inquisition opens the door for a misguided and ill-advised Commission to take steps to target and harass voters and could lead to purging of the voter rolls.’

“We fully condemn actions taken today by the President’s Election Integrity Commission seeking disclosure of data and personal information on virtually every voter across the country,” the group said in a statement. And continued:

This meritless inquisition opens the door for a misguided and ill-advised Commission to take steps to target and harass voters and could lead to purging of the voter rolls. We urge Secretaries of State who received a letter from Kris Kobach to reject this request and discourage state and local officials from participating in this Commission’s dangerous activities.  Today’s action underscores the fact that the Election Integrity Commission is operating in a reckless manner and its activities threaten to have a chilling effect on minority voters.

We know that voting discrimination and voter suppression are the real threats to American democracy and we will resist the Commission’s attempt to divert federal resources and attention away from these problems.”

Jason Kander, head of the Democratic National Committee’s Commission on Protecting American Democracy from the Trump Administration, also expressed his concern about the letter, which he called “very concerning.”

“It’s obviously very concerning when the federal government is attempting to get the name, address, birth date, political party and Social Security number of every voter in the country, Kander said in the statement. “I certainly don’t trust the Trump Administration with that information, and people across the country should be outraged.”

The most important aspect of any democratic election is participation. A democracy gains its legitimacy through elections only so far as those elections represent the will of the people. Limit voter participation, and there is a direct correlation between the legitimacy of an election and the democratic system. President Trump and Vice-President Pence’s “election integrity” commission is unequivocally declaring war on voters – our democratic legitimacy be damned.

The commission recently sent a letter to all 50 states asking that they provide all the names and associated birthdays, last four digits of social security numbers, addresses, political parties, and voting histories since 2006 of people on their voter rolls. This letter is helping to lay the groundwork for nationalized voter suppression.

This commission is a harbinger of a top-down, White House-endorsed assault on voters, specifically Democratic voters: the same voters who denied Trump the popular vote.

The commission is requesting the same information that Republican state governments have used to create hyper-partisan gerrymandering and enact restrictive voter ID laws. Such measures have been disturbingly successful at suppressing voting of minority and low-income citizens, groups that tend to vote with Democrats. This assault on voters might seem farfetched, except that we’ve seen this strategy too many times before to claim ignorance now.

After slavery ended, white elites invented felony disenfranchisement as a means to delegitimize black citizens and prevent them from gaining influence. We saw Jim Crow gut-punch our democracy in yet another attempt to disenfranchise minorities. We are witnessing history repeating itself.

Nationally, the Democratic party is gaining support as the country’s demographics become increasingly diverse. The majority of black, Native American, Hispanic and Asian voters vote as Democrats. The Republican party has known for several years now that its best tactic to cling to power is not to build a party worth supporting, but to deny participation in the political process to Democratic party voters. …