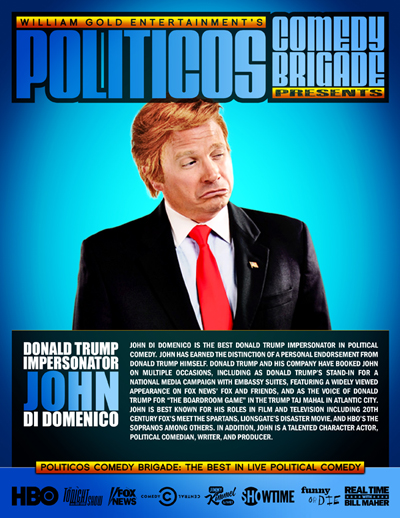 John Di Domenico looks nothing like Donald Trump: he’s 17 years younger, several inches shorter and a natural brunet, though lately he keeps his head shaved to make putting on the coppery wig easier, and his eyebrows bleached to match. Becoming Trump requires a full hour of hair and makeup. He tapes three large photographs of the president, one in profile and two straight-on, to any mirror he’s using, and then uses Ben Nye CoCo Tan foundation to turn his skin the requisite shade of atomic tangerine, dabs on wrinkles, lengthens his nose, and so on. Trump has “quite a big head,” but there’s not much anyone can do about that.

Even with the elaborate costume, Di Domenico’s physical resemblance to the president requires a little imagination – but of the many people who “do” Trump, his take is the most uncanny. It’s the voice. He recreates the uncommon way that Trump, to use Di Domenico’s phrase, “speaks from his teeth”; the wild fluctuations of nasality; the inconsistent New York accent; the sibilant “S”s and exaggerated vowels. He has also mastered the neck jerk, the squint, the off-tilt swagger. When Conan O’Brien and Chelsea Handler needed a Trump for their late-night talk shows, they called Di Domenico, and he has also become a regular on Fox News’s morning talk show.

As the historian Daniel J Boorstin wrote in 1962, “fantasy is more real than reality”. We have become, he wrote, the “first people in history to have been able to make their illusions so vivid, so persuasive, so ‘realistic’ that [we] can live in them”.

Di Domenico enjoys the appearances on Fox and ABC, the cameos on Glenn Beck’s radio show, the invitations to do adverts and spoof films, but he makes his living at corporate events, trade shows and private parties. He’s the guy executives hire to keep middle management amused at national sales meetings, or to provide a little excitement at the launch party of a flu-reduction medicine. He’s the booth decoration that gets passersby interested in your carpet company. He is the entertainment. He can do Guy Fieri and Jay Leno and Austin Powers andDr Evil, but for the last decade his trademark impression has been Trump. At the peak of the 2016 campaign, that one impression earned him as much as $40,000 a month.

Whenever Di Domenico appears in public in costume, people turn and gawk. They pull out their phones to take video, or they laugh spontaneously. “Oh my god,” they say. Or, breathlessly, “Donald!”

One afternoon in March, exiting a New York hotel, the sight of Di Domenico-as-Trump sent the front desk manager into a fit of giggles that verged on a panic attack. “Oh my god,” the guy kept saying, trying to catch his breath. “No way.” Faux Trump squinted, aimed a presidential finger in the man’s direction, and agreed to a selfie.

In the photograph, Di Domenico has his chest and gut thrown out, as if he’s leading from the widest point of his red sateen tie. The wig crests low over his brow. He’s flashing a presidential thumbs-up with one hand, his head is cocked to one side so his eyes squint unevenly, and his mouth has that protruded, half-open look of an aggravated orangutan. It’s all correct. …