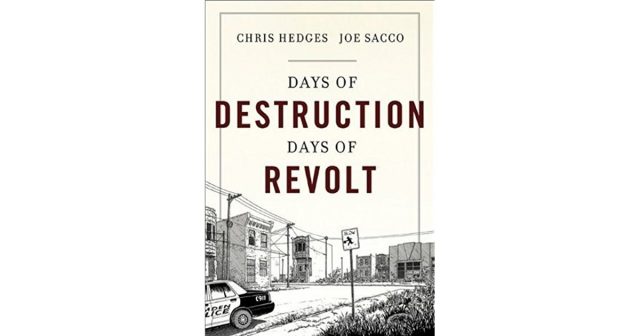 The release of the republican senate Trumpcare bill was yet another stunning piece of sociopathic class warfare. In this case the result would be tens of millions of the most vulnerable losing their health coverage and nearly everyone else seeing their rates and annual deductibles go up and coverage go down. Meanwhile, senate republicans would hand the 400 richest families in America a $33 billion tax cut over ten years.

What, many of my acquaintances ask, are they thinking? How could they? Don’t they realize the harm that would be done?

Many struggle to give voice to the injustice and coldly calculated cruelty routinely slung about by the republicans and their corporate owners.

According to journalist Chris Hedges one of the primary reasons we have such difficulty talking about what is going on is that we have lost the language of class warfare. After a century of harassment, hounding, censorship and, even murder, the voices of radical reformers in America have been largely silenced and sidelined.

Central to regaining language adequate to the scale of pathology that results in an obscenity like Trumpcare, Hedges explains, is to really understand – to really get on a gut level – the depth and venal depravity of the amoral and incestuous “tight oligarchic circles” of the super wealthy; the one-tenth of the infamous one percent.

“We need to recover the language of class warfare to grasp what is happening to us.”  – Chris Hedges

While the wealthy have always held disproportionate sway in our government, going back to George Washington, things have now returned to the criminal levels and haughty hypocrisy of the Gilded Age of the late 1800’s.

“We don’t live in a free market society,” Hedges says. “We live in a society where corporations at will loot the US Treasury and the Federal Reserve and are bailed out by the taxpayer. And yet, that fact of socialism for the corporations is ignored.”

We are left, Hedges bluntly notes, with a predatory corporate class. The extent of that predatory hunger is embodied in the deadly Trumpcare proposal.

A predatory class from an unplugged world

While from middle-class roots, Hedges knows the super wealthy. At a young age he was sent off to a private prep school on scholarship where he witnessed and came to know the ways of the ultra rich. He visited the homes of school mates who as 10 year-olds ordered adult servants about the house.

“They inhabit another world,” Hedges observes, a world he describes as “unplugged” from the realities of the majority. It is a world isolated from the consequences of behaviors and mistakes and larded with presumptive unearned reward.

The poster boy of such unearned pardon and privilege is George W. Bush, of whom Hedges observes, “You really don’t have a job until age 40 and then you are president of the United States.”

We can’t even begin to make the change needed until, Hedges argues, we find the right words.

Depending merely upon our institutions, is not enough. Hedges notes that the oligarchs are “destroying the safety valve” of incremental change. With the rapidly accumulating consequence of financial looting and cascading environmental damage time is running out.

“You can no longer adjust the system,” he explains. “You can’t ameliorate the suffering or the grievances of the under class – and now you are talking about half the country”

How can the super wealthy so casually condemn children and the elderly and those struggling along on minimum wage to illness and early death? How can they act with such disregard?

“The people who are running Wall Street don’t give a damn,” Hedges notes. “They know it’s going to collapse and what they are doing is stealing as much as they can as fast as they can on the way out the door. That is always symptomatic of a dying civilization.”

Watch The Real News interview below for more.

(Commoner Call commentary by Mark L. Taylor, 2017. Open source and free to use with link to www.thecommonercall.org )

Let’s Get This Class War Started

“The rich are different from us,” F. Scott Fitzgerald is said to have remarked to Ernest Hemingway, to which Hemingway allegedly replied, “Yes, they have more money.”

The exchange, although it never actually took place, sums up a wisdom Fitzgerald had that eluded Hemingway. The rich are different. The cocoon of wealth and privilege permits the rich to turn those around them into compliant workers, hangers-on, servants, flatterers and sycophants. Wealth breeds, as Fitzgerald illustrated in “The Great Gatsby” and his short story “The Rich Boy,” a class of people for whom human beings are disposable commodities. Colleagues, associates, employees, kitchen staff, servants, gardeners, tutors, personal trainers, even friends and family, bend to the whims of the wealthy or disappear. Once oligarchs achieve unchecked economic and political power, as they have in the United States, the citizens too become disposable.

The seesaw of history has thrust the oligarchs once again into the sky. We sit humiliated and broken on the ground. It is an old battle. It has been fought over and over in human history. We never seem to learn. It is time to grab our pitchforks.

The public face of the oligarchic class bears little resemblance to the private face. I, like Fitzgerald, was thrown into the embrace of the upper crust when young. I was shipped off as a scholarship student at the age of 10 to an exclusive New England boarding school. I had classmates whose fathers—fathers they rarely saw—arrived at the school in their limousines accompanied by personal photographers (and at times their mistresses), so the press could be fed images of rich and famous men playing the role of good fathers. I spent time in the homes of the ultra-rich and powerful, watching my classmates, who were children, callously order around men and women who worked as their chauffeurs, cooks, nannies and servants. When the sons and daughters of the rich get into serious trouble there are always lawyers, publicists and political personages to protect them—George W. Bush’s life is a case study in the insidious affirmative action for the rich. The rich have a snobbish disdain for the poor—despite well-publicized acts of philanthropy—and the middle class. These lower classes are viewed as uncouth parasites, annoyances that have to be endured, at times placated and always controlled in the quest to amass more power and money. My hatred of authority, along with my loathing for the pretensions, heartlessness and sense of entitlement of the rich, comes from living among the privileged. It was a deeply unpleasant experience. But it exposed me to their insatiable selfishness and hedonism. I learned, as a boy, who were my enemies.

One of our gravest faults

The inability to grasp the pathology of our oligarchic rulers is one of our gravest faults. We have been blinded to the depravity of our ruling elite by the relentless propaganda of public relations firms that work on behalf of corporations and the rich. Compliant politicians, clueless entertainers and our vapid, corporate-funded popular culture, which holds up the rich as leaders to emulate and assures us that through diligence and hard work we can join them, keep us from seeing the truth. .. 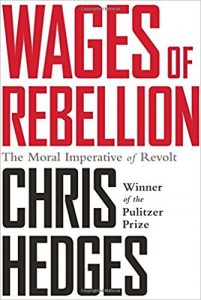 “We hope it’s not the right answer” — Climate Models Are Running Red Hot, And Scientists Don’t Know Why

The Real Obstacle For Sanders Is Not Trump. It’s The Big Money Democratic Establishment

Beneath The Peaceful Veneer Of Virginia’s Gun Rally: ‘I Have a Dream of a Boogaloo’