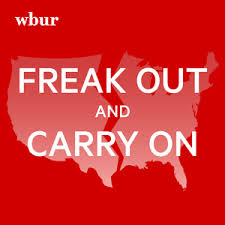 In Freak Out and Carry On, the new politics and history podcast from WBUR, Pulitzer Prize-winning author and journalist Ron Suskind and Boston College historian Heather Cox Richardson speak with the Washington Post’s Dana Milbank about Jeff Sessions’ contentious Senate hearing and the historical tension that attorneys general, from Mitchell Palmer to Alberto Gonzalez, have faced. Do they serve the president or the American people?

Heather Cox Richardson: It seemed to me that Sessions was performing for an audience of one and that was President Trump. And that says something really interesting about this government and about what it might be trying to do and what role the attorney general in this administration is going to take on, and how that may or may not serve America terribly well.

Dana Milbank, the Washington Post: I was watching a person, Jeff Sessions, who was having some memory trouble. I suspect from here on out the Russia investigation is going to continue to be more anti-climactic because Robert Mueller is taking over this investigation.

Ron Suskind: Heather, the attorney general, who is he representing? Is he representing some larger charge of the United States, or is he there simply the president’s lawyer? There’s a lot of back and forth across history.

He is not the president’s lawyer. He is the lawyer for the U.S. government, and the problems that attorney generals get into is when they make the mistake of thinking that serving the president alone means serving the United States’ people, and I think that that’s a problem that Sessions might be getting into. But there was a moment in the past that looks much like the present that most people have forgotten, and that is crucially important. That moment is under President Woodrow Wilson right after World War I in 1919 to 1920, when the attorney general actually sponsored a number of raids against the American people that really have gone down in history as some of our most dangerous domestic events.

During World War I, in order to whip up support for the war, President Woodrow Wilson encouraged fears of foreigners. At first it was primarily fear of Germans, but after the Bolshevik Revolution of 1917, the real American fear turned to communism in Russia. The fear was that these people would bring communism to America. By 1919 there were a number of communist organizations that started to plant bombs in America, and one of them was in the home of the attorney general, a guy named Mitchell Palmer. Afterwards, Palmer vowed he was going to wipe radicalism out of America. And he launched what are called the Palmer Raids. By 1920 they started to round up anybody who appears to be a communist or a labor activist. So by the end of the Palmer Raids they have created a situation in America where it seems to be open season on people who are organizing to promote the interests of labor or who might be somehow politically against the Wilson administration. So, by the end of the Palmer Raids, they have officially rounded up — and arrested without charges — more than 6,000 Americans.

Richardson: So Ron, you know, one of the things that really interests me is … [how] you talked about how we have entered the stonewall period with Attorney General Sessions. What does that mean in terms of this kind of an investigation, like what is he hoping to accomplish with that?

Suskind: Stonewalling is a short-term game, narratively speaking. You know you stonewall as long as you can. In some ways I think Sessions is playing a really short game here, protecting himself. I’m not sure how it’s gonna turn out, saying, “I’ve just gotta live another day,” because he’s in the cross-hairs. Also, I think it also plays well to the base. He’s demeaning these folks on the Senate panel.