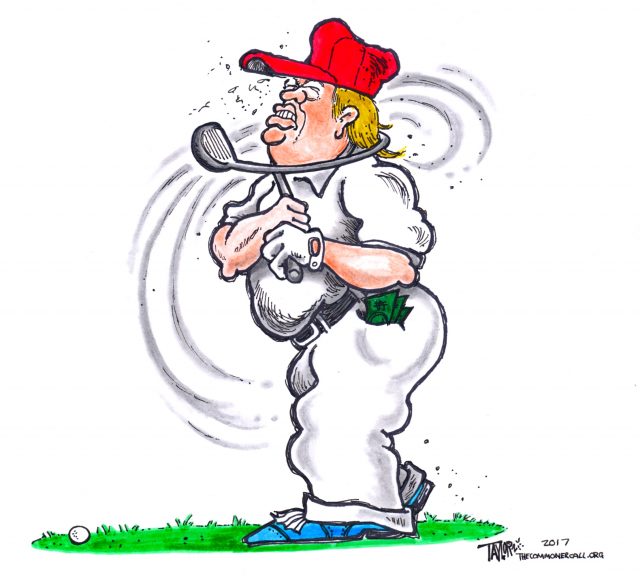 The real star of the day is Eric Trump, the president’s second son and now the co-head of the Trump Organization, who has hosted this event for ten years on behalf of the St. Jude Children’s Research Hospital in Memphis. He’s done a ton of good: To date, he’s directed more than $11 million there, the vast majority of it via this annual golf event. He has also helped raise another $5 million through events with other organizations.

The best part about all this, according to Eric Trump, is the charity’s efficiency: Because he can get his family’s golf course for free and have most of the other costs donated, virtually all the money contributed will go toward helping kids with cancer. “We get to use our assets 100% free of charge,” Trump tells Forbes.

A situation in which outside donor money is redeployed away from the core mission in ways that seem to ultimately benefit the family that pays the majority of the board is–at best–an appearance problem.

That’s not the case. In reviewing filings from the Eric Trump Foundation and other charities, it’s clear that the course wasn’t free–that the Trump Organization received payments for its use, part of more than $1.2 million that has no documented recipients past the Trump Organization. Golf charity experts say the listed expenses defy any reasonable cost justification for a one-day golf tournament.

Additionally, the Donald J. Trump Foundation, which has come under previous scrutiny for self-dealing and advancing the interests of its namesake rather than those of charity, apparently used the Eric Trump Foundation to funnel $100,000 in donations into revenue for the Trump Organization.

And while donors to the Eric Trump Foundation were told their money was going to help sick kids, more than $500,000 was re-donated to other charities, many of which were connected to Trump family members or interests, including at least four groups that subsequently paid to hold golf tournaments at Trump courses.

All of this seems to defy federal tax rules and state laws that ban self-dealing and misleading donors. It also raises larger questions about the Trump family dynamics and whether Eric and his brother, Don Jr., can be truly independent of their father.

Especially since the person who specifically commanded that the for-profit Trump Organization start billing hundreds of thousands of dollars to the nonprofit Eric Trump Foundation, according to two people directly involved, was none other than the current president of the United States, Donald Trump. …

According to Forbes, Donald Trump redirected more than $1 million in charitable donations intended for kids with cancer to the Trump Organization, making himself and his cronies richer. Turns out, that’s not the first story proving even terminally ill children are no match for Trump’s greed and cruelty.

Earlier this year, Michael Skolnik appeared on the Politically Re-Active podcast, where he relayed a similar story about then-citizen Trump (it starts at about 28:20). Skolnik is a longtime business partner of Def Jam founder and billionaire Russell Simmons, who had a high-profile falling out with Trump during the presidential campaign:

“I sat next to Donald at a dinner one time at the Waldorf-Astoria for a charity event,” Skolnik recounted. “This is three or four years ago. It was for a very rare children’s disease. The guy whose table it was, who was a friend of Donald and a friend of Russell’s, got onstage and pledged a million dollars to this charity and said to the audience in the Waldorf, ‘Who’s going to match me?’ And—I’ll go under oath, [swear on] my grandfather’s grave, may my grandfather rest in peace—Trump was sitting right next to me and he raised his hand. He was like, ‘A million bucks. I’m in!’” And the whole place exploded in craziness. Here was $2 million raised in 15 seconds for this amazing charity. And David Fahrenthold from the Washington Post saw a picture of me at the event and called me during the election and said, ‘Do you remember what happened?’ I said, ‘Yeah, Donald pledged a million bucks, check it out.’ And he went and looked at it and Donald gave nothing. Literally zero dollars.”

Withholding charitable donations from dying children is generally considered among the lowest of the lows humanity can reach, so it should come as no surprise that Donald Trump has touched the bottom. More than once, apparently. While the details of the Skolnik story differ from the findings of the Forbes investigation, the theme of Trump’s selfishness and power-grubbing remain the same.  …