Donald Trump knows the power of branding and actually makes huge profits by selling the use of his name. But the power of naming and branding can be a double-edged sword: when a president creates and perpetuates real human disasters, we can truthfully attach his name to them and allow well-earned disaster branding to spread naturally.

Mr. Trump uses the word “disaster” metaphorically for policies and practices he doesn’t like. But there are real, literal disasters in the world: huge fires, devastating, floods, deadly storms, major droughts — disasters caused systemically by the heating of the earth’s atmosphere and its effects in the global weather system.

The Paris Accords are a worldwide, scientifically-governed effort to reverse the heating of earth’s atmosphere and so to reverse its literal disastrous effects — effects that kill, can start wars, and cost trillions.

When President Trump pulled America out of that worldwide effort, he showed that politics can have deadly systemic effects as well, like significantly slowing efforts to reverse these effects and allowing real climate disasters to get worse.

Political and corporate leaders in America — governors, mayors, CEOs — have pledged to act as if the United States were still part of the world community effort of the Paris Accords. There are substantive things they can do collectively, and they deserve praise for their moral courage and good sense to go on in the face of the powerful opposition of the Trump Administration.

It’s time for disaster branding — associating real disasters that Trump is responsible for perpetuating or creating with the Trump brand.

But we need not feel powerless in the face of the Trump government. The citizens of the United States have a power beyond the ballot box: the power of naming, and of disaster branding. Acting together, we can give a brand name to all those major fires, storms, floods, and droughts perpetuated and caused by Mr. Trump’s actions against the worldwide effort to end those disasters.

Name the major disasters after the person most responsible for perpetuating and causing new ones in the future. When sea level rise floods Florida, or when atmospheric heating produces massive evaporation over the Pacific that blows north and east resulting in huge floods throughout the Midwest, name them Trump flood disasters. When continued atmospheric heating systemically leads to massive fires in Texas, name them Trump fire disasters.

When the heating of the Gulf of Mexico above historic norms leads to extra strong hurricanes, name them Trump hurricanes and name their effects Trump devastation. When the systemic effects of unusual atmospheric heating lead to a drought, with water shortages and agricultural loss, name it a Trump drought.

We are not accustomed to using the power that millions of ordinary people have to name what is harming them and their planet and the futures of their children and grandchildren. But the time has come to use that power. Just say it.

If such Trump disaster branding becomes viral, it will illustrate the seriousness of the Trump’s Administration’s opposition to addressing the devastation caused by the heating of the earth’s atmosphere. Environmental activists have struggled to convince the public of the urgency of global warming disasters. But by withdrawing from the Paris Accords, Mr. Trump has created such a deadly situation that an unusual measure is called for. We must name the person most responsible. It’s time for disaster branding — associating real disasters that Trump is responsible for perpetuating or creating with the Trump brand.

All that is necessary is speech — free speech guaranteed by the Constitution. We don’t have to march in protest, or engage in civil disobedience, or do anything the least bit violent. You just have to say the words. There is power in naming.

Giving Up Is NOT An Option: Steps To Counter Trump’s Abandonment of Paris Climate Accord

Let’s just give up. That’s one way of responding to the reports that President Trump has decided to pull the United States out of the Paris climate accord.

After all, without the world’s largest economy and the second-largest emitter of greenhouse gases onboard, what point is there in any of us doing our part to try to prevent catastrophic climate change? Time to focus on yoga and juicing and what the kids today call “self-care.” Or maybe there’s a recreational drug that will make serial disasters seem exciting. Oh, and if you are really rich, it’s time to join the movement of high-end preppers and invest in some land on higher ground.

It’s time to communicate with this President in the only language he appears to understand: money.

Monstrous to the people in the United States who cannot afford to escape the worst impacts of storms like Sandy and Katrina, and whose homes and communities are already disappearing because of coastal erosion, from Alaska to Louisiana.

Today, I feel the same way about the urgency of climate action as I did yesterday: The threat is so grave that it is immoral to waste even a moment pondering our chances of success. So long as there is any chance of keeping temperatures below truly catastrophic levels, we have an unbreakable responsibility to do everything in our power to increase those chances.

And that means deploying every tool in the policy, activist and judicial arsenal to lower emissions. Since Trump has effectively turned the federal government into a subsidiary of ExxonMobil, from here on in, the rule of thumb needs to be: Every domain that he does not control needs to fully commit to being ExxonMobil’s worst nightmare.

Mayor de Blasio just announced that he plans to “sign an executive order maintaining New York City’s commitment to the Paris Agreement.” That’s good news. So is the ongoing investigation by New York’s attorney general into whether ExxonMobil misled shareholders about climate risks. And we need more examples like these.

Large states like New York and California need to commit to getting to 100% renewable energy as fast as current technology allows (and fortunately, that’s very fast). We also need states and cities to show that policies that decrease emissions don’t have to drive up prices or drive down employment; on the contrary, they can be designed to bring better, cheaper services and unionized jobs to those who are currently the most economically excluded.

Universities, faith institutions, foundations and trade unions need to use their endowments and pension funds to starve out the fossil fuel sector and bet big on clean energy. …

Support Alernative News From In These Times: Donate $30 And Get Naomi Klein’s New Book For Free 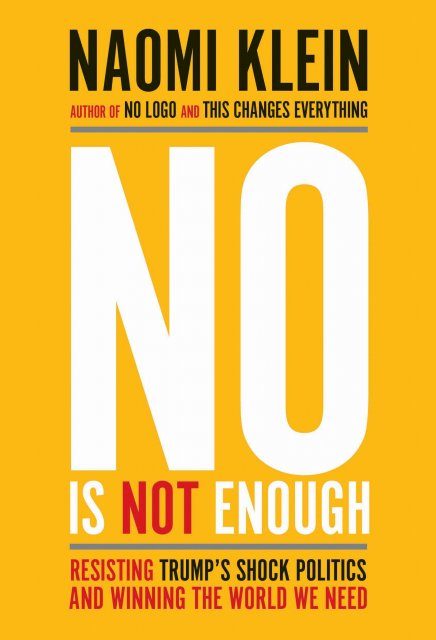 In many ways, the election of Donald Trump feels like the culmination of the numerous recent crises we’ve faced in the United States, from climate disasters to corporate takeovers to financial meltdowns. So what better thinker to guide us through this trying moment in our history than Naomi Klein?

We’re thrilled to announce that for a limited time we are able to offer copies of Naomi Klein’s brand-new book, No Is Not Enough: Resisting Trump’s Shock Politics and Winning the World We Need, in return for donations of $30 or more to In These Times.

No Is Not Enough provides a kaleidoscopic view of the threats the Trump administration poses to our climate, economy, civil society and so many other aspects of our lives. Yet the book also points a way forward, showing how individuals and groups are successfully pushing back and advancing movements for justice even in the face of these unprecedented threats.

We’re partnering with the book’s publisher, Haymarket Books, and every dollar of your donation will help ensure that In These Times is able to report on the growing movements resisting the Trump administration and working to build a more just future.

It’s a mission Naomi Klein, an In These Times contributing editor, has carried out for more than a decade through her groundbreaking writing.

No Is Not Enough goes on sale next Tuesday, June 13. Please make your donation of $30 or more today to claim your copy, and we’ll send this important book to you as soon as it’s released.

P.S. For international orders, please make a donation of $50 or more to cover shipping expenses.

P.P.S. All donations to In These Times are tax-deductible, to the extent permitted by law.