So what you say? We’ve been hearing news about previously undisclosed contacts between Kushner and others for some days now; why lead with this? The Washington Post broke a story on Friday talking about a secret back channel for communication with Putin, again, so what? National Security Advisor H.R. McMaster assures us that governments do this all the time and, heck, isn’t this all about fighting terrorism?

I encourage you to read the article, much of this sounds like old news – investigation of Flynn, Kushner catches FBI attention, Kushner not a target of investigation – but a bit more than half way through the article you get to this:

“FBI investigators are examining whether Russians suggested to Kushner or other Trump aides that relaxing economic sanctions would allow Russian banks to offer financing to people with ties to Trump, said the current U.S. law enforcement official.

“The head of Russian state-owned Vnesheconombank, Sergei Nikolaevich Gorkov, a trained intelligence officer whom Putin appointed, met Kushner at Trump Tower in December. The bank is under U.S. sanctions and was implicated in a 2015 espionage case in which one of its New York executives pleaded guilty to spying and was jailed.”

The smoking gun? If we were playing Clue this would be Kushner, in Trump Tower, with Gorkov – promises of quid pro quo for money. The article goes on to state that there’s no evidence of Trump authorization or even awareness, no evidence the contacts were improper. To McMaster’s assurances of normalcy – is it routine to set up the technology for back channel communication in a Russian embassy?

Is it routine to use a Russian spy representing sanctioned state owned Russian banks as part of the arrangement for secret back channel communications?

The Russia Monitor highlighted Kushner’s December meeting almost two months ago, but now we can begin to fill in the blanks. We have a Kushner December 2016 meeting with a Russian spy representing a state-owned bank. This was the prelude to a secretive Seychelles meeting attended by mercenary Erik Prince (founder of Blackwater; brother of Betsy DeVos). The Seychelles meeting was hosted by the Emirates Crown Prince of Mohamed bin Zayed Al Nahyan (who was at the December meeting without informing the Obama administration; and visited the Trump White House right after Lavrov, Kislyak and TASS).

The Seychelles meeting was also about back-door communication to Putin – a two-day meeting. Involving a mercenary entrepreneur up to his crew cut is questionable dealings. So yes – simple headline: Kushner Attended The December Meeting. That’s like the first sentence in a short story. More like the first sentence in a chapter of a very long, dark novel. In case anyone is tempted to say ‘fake news’, Prince has confirmed the Seychelles meeting, as has the Crown Prince. All agree the Russians were in attendance.

Kushner is not denying the December meeting or even the purpose. Or at least he is no longer denying the meeting. The administration’s public ‘defense’ will be “so what”, “no laws broken” and McMaster has already said it’s not unusual to set up non-public communication. Watch as others come forward to explain how this is actually all good for us – and better all around if you simply forget all those past denials. And, of course, the fact that the operation was supposed to be based in the Russian embassy.

Eric Trump weighs in, (there are a lot of people that) “want to further a narrative for their own political agenda. And I really believe that they would rather see this country fail than see him [Trump] succeed.”

Not a new deflection, but if we have legitimate questions they are dismissed because we are tagged as Trump-haters. The last time Eric chimed in he offered a similar view that only Trump-haters would remain unconvinced after the launch of 59 Tomahawk missiles into Syria.

We are getting more detail on Flynn and Kushner. Manafort is clearly under investigation. We haven’t even started on Carter Page, Roger Stone or others.

More on denials and deflection …

Trump and Russia – The Timeline

The Hill recently ran a timely and excellent summary of the Trump-Russia timeline. As an example you can consider Kushner’s December meeting and Prince’s January Seychelles meeting against this timeline. I’ve edited the text from the article (full credit).

January 10, 2017 –Attorney General nominee Jeff Sessions testifies that he is unaware of any Trump campaign communications with the Russian government during the campaign.

January 11, 2017 – Trump tweets, “Russia has never tried to leverage to use leverage over me. I HAVE NOTHING TO DO WITH RUSSIA – NO DEALS, NO LOANS, NO NOTHING!”

January 15, 2017 – Pence says on Face the Nation that Flynn did not discuss sanctions with Kislyak.

February 14, 2017 – White House Press Secretary Sean Spicer declares in a press conference that Trump stands by his assertion that no member of the campaign, including Flynn, had contacts with Russia before the election.

February 16, 2017 – Trump says he has nothing to do with Russia, calling the reports about campaign associates’ ties to Moscow a “ruse”. Trump acknowledges that Flynn did have contacts with the Russian ambassador but describes this as routine contact.

March 1, 2017 – The Justice Department confirms that Sessions spoke twice to Kislyak before the 2016 election.

March 20, 2017 – FBI Director Comey confirms that the bureau is investigating Russian election interference, and any links between Moscow and Trump’s campaign.

May 8, 2017 – Former acting attorney general Sally Yates testifies she warned the White House that Flynn and Kislyak had discussed sanctions.

May 23, 2017 – Former CIA Director Brennan confirms he viewed intelligence showing people involved in Trump’s campaign had interacted with Russian officials and that the contacts “concerned” him.

May 25, 2017 – Justice Department confirms that Sessions did not disclose his meetings with Kislyak on his application for a security clearance.

I offer this as a succinct way of seeing the denials, the deflections and counter-accusations. But the scope continues to broaden. Hence Bannon’s new role to head the White House War Room to fight back.

The Defense: An Example

Here is a great short example of denial and deflection similar to McMaster’s statements. The assurances of normalcy all sound so good: back channels happen all the time! Right?

But Joy Reid of MSNBC tears this apart as she asks, “…in your (Russia) facilities”? “How do sanctioned Russian banks fit into a back channel?” To which the response/defense by Wall Street Journal columnist Kimberly Strassel is “…we don’t know the answers to those questions”.

AHA – if you don’t KNOW, why dismiss? Why not ask for an effort to get to the bottom of this instead of “they all do it”. Heard that before? False equivalency – favorite form of dismissive deflection.

The Defense: A Second Example

Trump Tweets to all: “I HAVE NOTHING TO DO WITH RUSSIA – NO DEALS, NO LOANS, NO NOTHING!”

NOT TRUE – let’s take a look at how it works in the real world – or Trump World.

Do you know who Lena Baronoff is? 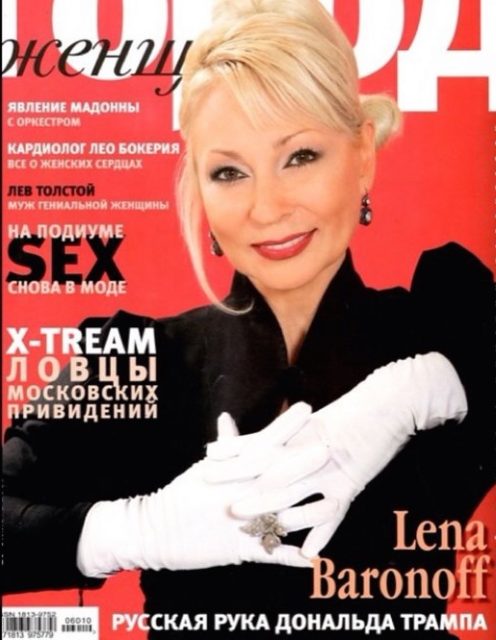 From a DailyKos article:

“Elena Baronoff came from the Russian government as a spy and was selling Trump real estate to wealthy Russians to launder money. This story helps Donald Jr.’s  comment about ‘Russian money pouring in’ make a lot more sense.”

Oh come now – fake news, right? Not at all, let’s take a look at the Trump Sunny Isles properties, first this from the same DailyKos article:

“Elena A. Baronoff was listed as the VP of Customer Relations at Trump Grande, and was considered the “International Ambassador for Sunny Isles Beach,” an exclusive strip of land that was reserved for the richest of the rich.  Everyone knew her in the enclave, and a profile of her even called her the “face of Sunny Isles Beach and the real estate industry.” She was close to millionaires, billionaires, designers and moguls — and even was quite wealthy herself.

“The problem is that, despite being a well-known socialite, she was also a former Spy.”

Now this article – from Reuters , details explaining millionaires, billionaires, moguls and Russians. The article is a bit long, but opens with this summary statement:

“A Reuters review found that at least 63 individuals with Russian passports or addresses have bought at least $98.4 million worth of property in seven Trump-branded luxury towers in southern Florida.”

So it’s as if Trump is saying HE DIDN’T SELL THOSE PROPERTIES TO THE RUSSIANS! By that he means the Russian investments in Trump properties. He didn’t need to sell them: Lena sold them for him.