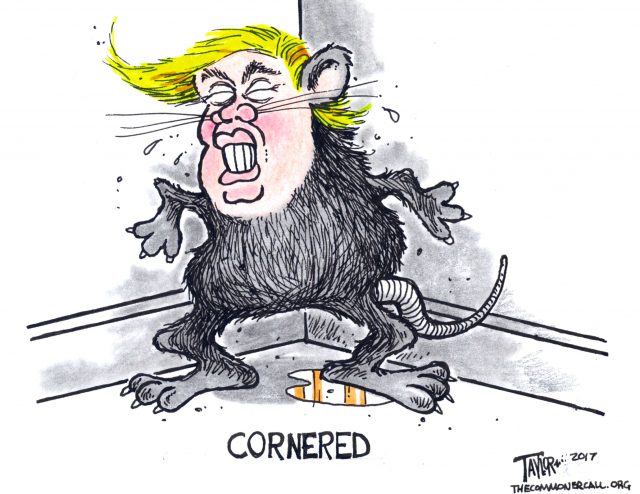 With a cascade of leaks, a war with the FBI, and the announcement of the appointment of a special counsel to investigate allegations of wrongdoing, Donald Trump’s grotesque presidency now hangs by a thread. By the hour, it seems, the possibility of impeachment, of him being declared incompetent to govern—or, at the very least, of his own party bringing irresistible pressure on him to resign—grows.

We have to assume that he will try to manufacture—or exacerbate—international crises as a way of rallying on-the-fencers to his side.

And as that pressure grows, so balloons the peril of our moment. For the 18 months that Trump has been center-stage politically, he has shown an extraordinary commitment to demagoguery, to flirtations with mob violence, to peddling conspiracy theories, to military grandstanding to distract attention from his problems, and to race-and-religion-baiting whenever the mood suits. He has demonstrated utter contempt for the separation of powers, extraordinary hostility to the free press, and a disconcerting fondness for dictators the world over. He has also shown himself to be brittle and thin-skinned, relishing the ability to use his vast platform to attack those he deems to be his personal “enemies,” but unable to tolerate disagreement or dissent when it is directed at him.

Why do I rehash all these known traits now? Because—cornered, humiliated, and increasingly in legal peril—Trump will likely resort to all of the tricks of the demagogue as he fights for his survival. This is a man who has never played fair in his life, who takes pleasure in inflicting hurt on those weaker than himself, and who believes that ideals, or simply basic decency, are mere annoyances in the one game that matters: the game of power.

For months, progressives have worried about a “Reichstag fire” moment: about the possibility that Trump, Bannon, Miller, and the other fanatics who people this administration could gin up an emergency scenario that would allow them to clamp down on dissenters, muzzle the press, and neutralize the courts and domestic political opponents. We have worried about emergency decrees that would be used to justify enemies lists, databases that would monitor people by their religion, and so on. And yet, for all of his bluster …

The Hidden Bombshell in the Comey-Trump Story

How can you tell an authoritarian when you see one? We know the 20th century hallmarks — brown shirts, street rallies, and the like. But there’s an autocratic attitude, some historians suggest, that can easily be traced across the centuries.

To put it simply, New York University professor Ruth Ben-Ghiat told Democracy Nowrecently, “authoritarians believe that institutions should serve them, and not the other way around.”

Less than two weeks before the November vote, the now-former FBI director announced that he was reopening an investigation into one of Trump’s favorite subjects: Hillary Clinton’s emails. For that, Trump praised Comey’s “guts,” while Clinton now blames Comey’s announcement for costing her the election.

Trump seemed happy to accept that help. But in a twist, Comey also found the guts to investigate whether Trump accepted help from the Russians, too. For that, he was fired this month. “This Russia thing” was “a made-up story,” Trump complained by way of explanation.

All that’s explosive enough. Even more so was a subsequent revelation: That Trump had called on Comey to “let go” of an investigation into Michael Flynn, Trump’s national security adviser who’d been ousted for lying about his own contacts with the Russians.

“In addition to asking Comey to stop investigating his friend Flynn, the president called on the FBI director to arrest journalists who published things Trump found unflattering.”

That little bombshell is now headline news all over. But buried in the New York Times story about that memo was another, less noticed bomblet: “Alone in the Oval Office,” the paper reported, Trump said “Comey should consider putting reporters in prison for publishing classified information.”

That’s right: In addition to asking Comey to stop investigating his friend Flynn, the president called on the FBI director to arrest journalists who published things Trump found unflattering. Perhaps including stories like this one.

Was this an impulsive request? Not likely. In fact, the administration appears to have been laying the groundwork for this for some time.

Take WikiLeaks. Trump once said he “loved” the group for publishing leaked Clinton campaign emails. But then it earned the White House’s enmity by also publishing details about CIA hacking.

Trump’s CIA director has since described WikiLeaks as “a hostile foreign intelligence service” and warned that “America’s First Amendment freedoms” will not “shield them from justice.” Attorney General Jeff Sessions is now trying to bring a case against the group’s founder, Julian Assange.

While leaking classified information may be a crime, publishing it most certainly isn’t — that’s been protected by the Supreme Court since the early 1970s. In this respect, any charges brought against WikiLeaks could equally be brought against virtually every newspaper and TV station in the country.

Which, by all appearances, is the idea. When CNN asked if the WikiLeaks case could lead to charges against other outlets, Sessions didn’t bother to deny it.

Of course, this is all under the auspices of a candidate who called journalists “lying, disgusting people” and even wondered aloud about whether he’d kill them as president. (He ultimately said no, but seemed reluctant.) And it’s the same White House that wants to sue journalists whose reporting it disputes.

But consider that Michael S. Schmidt, the Times reporter who broke the Comey memo story, happens to be the very same person who reported on Hillary Clinton’s use of a private email server. Has anyone benefited more from that reporting than Trump?

It all depends on the headlines that come next, apparently.

They’ve surely been spotty about it, but in a democracy public institutions — from law enforcement to the free press — are supposed to serve the public, not the president. If Trump can’t accept that, maybe he’s the one who should be fired.