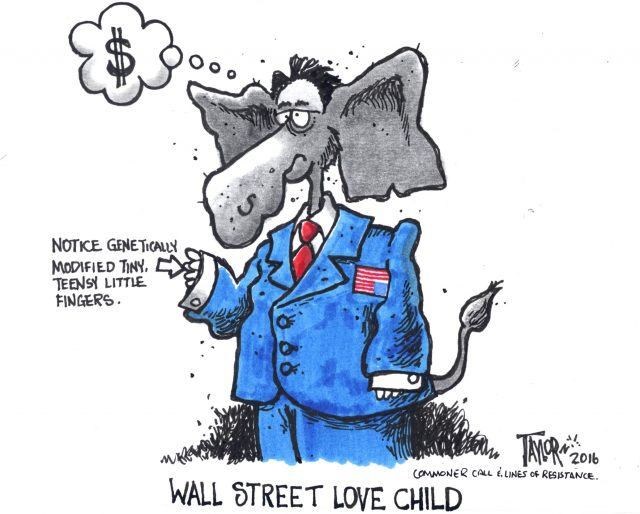 Just as Donald Trump mortgages the White House to Goldman Sachs, Barack Obama does a Hillary: He agrees to take $400,000 from Wall Street to give one speech. Obama will make as much money in one hour as the average American makes in about five years.

The excuse can’t be lack of money. He and Michelle are about to receive $60 million in book advances on top of the several million already in the bank plus the $200,000 pension as an ex-president.

So why take the Wall Street cash?

The former president’s spokesperson, Eric Schultz, provides one of the lamest excuses ever to HuffPost:

With regard to this or any speech involving Wall Street sponsors, I’d just point out that in 2008, Barack Obama raised more money from Wall Street than any candidate in history ― and still went on to successfully pass and implement the toughest reforms on Wall Street since FDR.

My dog ate my homework would be closer to the truth.

They are convinced they don’t need to cut their ties to the super-rich because after four years of Trump mayhem, voters will come running their way. After all Hillary won the popular vote, didn’t she? So why change? Because they can’t be the party both of the predators and the prey.

First of all, FDR’s reforms were sufficiently tough that financial crises all over the world virtually disappeared for a quarter century. Then both parties, with an eye to Wall Street cash, unraveled those regulations, leading to the largest financial crash since 1929.

Second, why would any politician in their right mind want to brag about taking more money from Wall Street “than any candidate in history?” After all, Obama raised all that money right in the middle of the biggest financial rip-off in history. Does he think that glowing achievement will help the Democrats win back Michigan, Wisconsin and Pennsylvania?

Finally, what tough reforms? No bankers in jail. No return to Glass Steagall. Banks bigger now than before the crash. Hundreds of billions in bailouts. No elimination of the carried interest loophole that pours billions into the pockets of hedge fund managers. No end to destructive stock buybacks and ultra high frequency trading. And, all the while, income and wealth inequality hit new highs.

David Axelrod, the former White House confident, suggests that Obama needs the spare change so that he can kick back a bit:

I don’t think that former presidents necessarily take vows of poverty, or should. Will he be out there doing good? I think he will be. I watched him for eight years devote every ounce of his energy and thought and attention to the service of this country. I hope that he does find some personal time and solace and enjoyment now. He’s earned it.

Note how artfully Axelrod dodges the Wall Street part of the transaction and the fact that Obama will soon be filthy rich from the book advances. You can be sure that Axelrod also knows that taking $400k from financial elites is bad optics, pure and simple. Either that or Axelrod too is supping from the same trough.

The Real Motivation? In Your Face, Bernie!

The former president is not a stupid man, nor does he suffer from amnesia. He fully recalls the Sanders attacks on his administration overall, and against Hillary for her Wall Street speeches, the contents of which she would not release. As Bernie put it,

Now every candidate in the history of the world ― Democrat, Republican ― when they receive big amounts of money from Wall Street … they always say: ‘Not gonna impact me!’ And our question is: If it’s not going to impact their decisions, why would Wall Street be spending…million[s]?

So let’s think this through. Obama definitely does not need the money… not one penny of it, and he’s not offering to give it away to charity or to community organizing or to the resist movement. No, for the moment, it’s going directly into his bank account.

He also knows that Wall Street is the proxy for runaway inequality, for ordinary people being left behind, and for the collapse of the American dream.

Yet he still takes the Wall Street money?

Yes indeed. He takes the money to show that Bernie and his supporters are immature and ignorant about how to play the game. Worse still he subtly is blaming Bernie for Hillary’s loss. Because Bernie made such a big deal about something that just doesn’t matter ― Wall Street cash ― he weakened Hillary and paved the way for Trump.

Obama is saying loud and clear that Bernie and his minions are hopelessly naive ― that it just doesn’t matter if you take Wall Street cash. What matters is what you do, and I, Obama, did all that could be done about Wall Street. Accept the limits and realities of American politics. Grow Up! It has to be done. There’s nothing wrong with taking Wall Street money if your motives are pure.

Except there is. The money is dirty with greed.

What Obama, Hillary and the corporate Democrats have never grasped and may never grasp is that Wall Street’s riches come from strip mining of the rest of us. As hedge funds press companies for lucrative stock buybacks, workers suffer as wages and benefits are cut, and jobs shifted around the globe. Communities suffer as Wall Street helps the rich stash their wealth abroad, shifting the tax base to tapped out workers. States suffer as Wall Street firms extract enormous fees to mismanage pension funds and provide high fee financing for badly need infrastructure projects. Students and their families suffer as Wall Street gouges the young through student loans. Those trapped in the prison system suffer as Wall Street backed firms set up private prisons for profit.

That unbridled greed tells us why the richest country in the history of the world has a crumbling infrastructure, a declining middle class and the largest percentage of children living in poverty among developed nations.

Through financial strip-mining the wealth of our nation is siphoned into the hands of the few. Neither political party has done anything about it, except make it worse. (See Runaway Inequality)

Bernie is right. It’s a rigged system and the American people know it.

By Obama so clearly casting his lot with the Wall Street Democrats, a new path is opening for the re-election of Trump ― the fissure of the Democratic Party. The more the Democrats try to become the party that raises “the most money in history” from Wall Street, the greater the odds that an independent candidate with muscle and resources will emerge in 2020. It’s not hard to imagine a Ross Perot of the left capturing 20 percent of the vote in a national election. Then Trump, like Bill Clinton in 1992 could win with only 40 percent or so of the vote.

The corporate Dems have lost 917 state and local offices since 2008. Yet they still seem oblivious to their Wall Street baggage. They think they can continue to line their own pockets and still be anti-Trump champions. They are convinced they don’t need to cut their ties to the super-rich because after four years of Trump mayhem, voters will come running their way. After all Hillary won the popular vote, didn’t she? So why change?

Because they can’t be the party both of the predators and the prey.

What the Democrats continue to miss, and what “immature” Bernie people see so clearly, is that the country is hungry for politicians who give them a voice against unbridled greed. You can’t fight against greed when you become a symbol of greed itself.

(To spread the word about runaway inequality, join our educational network at runawayinequality.org. We need you. We need each other.)