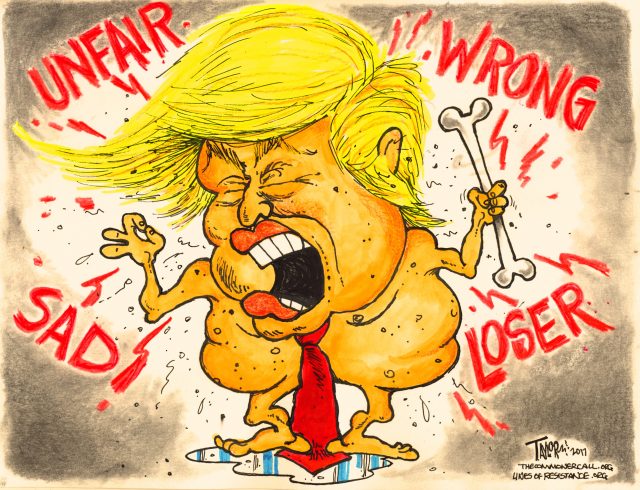 “How is it Trump seems to care the least for the very folks who voted for him? Not a day passes that he doesn’t betray some of them.

“And instead of bombing another country, how about building our own with better bridges, railroads, highways and airports, how about tending to those who need jobs and homes, how about health care that really gets the job done?

“Then we might finally achieve the transformative moment when even Donald Trump at last becomes president for real. But don’t hold your breath. It is foolish to expect anything like this from a man-child who plays with America’s destiny as if it were a rag doll in his gilded crib.”

Trump’s Bumbling Is The Stuff Wars Are Made Of

As far as I am concerned, this week brought perhaps the most dangerous and destabilizing events in the presidency of Donald Trump, and it has been almost completely overshadowed by a cavalcade of news such as elections in Georgia and the Bill O’Reilly story.

But while many of us may be preoccupied, make no mistake the world is watching – and is worried. For over a week, the American people and the world were led to believe that the United States was sending an aircraft carrier strike force to the waters off of North Korea, in an escalating tension over the standoff with that troublesome nation over its nuclear and missile ambitions.

President Trump boasted about his show of force. “We are sending an armada, very powerful. We have submarines, very powerful, far more powerful than the aircraft carrier,” he said. The National Security Advisor and the Secretary of Defense both reiterated the information. Except it wasn’t true. The carrier USS Carl Vinson and its accompanying ships were heading in the other direction, thousands of miles away. 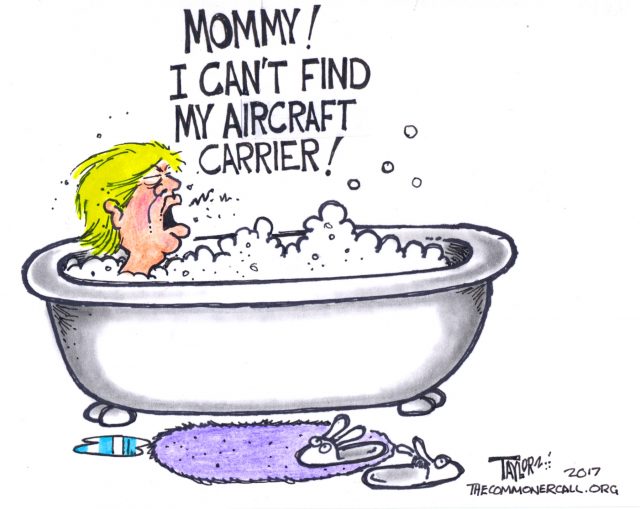 How and why can this happen? There are no good explanations. Incompetence, deceit, a lack of communication? This is how wars can get started by accident. This is how allies can feel betrayed and adversaries emboldened. Our world is less stable today because of this situation. And this was supposed to be the relative area of stability within the Trump Administration – national security.

The fact that this has gone on for days is inexcusable. The world’s nations rely on being able to trust what an American president says, especially on an issue like this. More than anything else that has happened, more than the missile strike in Syria or even the worrisome congratulatory phone call to the increasingly dictatorial president of Turkey, this is a foreign policy debacle that is shaping world affairs in big ways. I hope you all take the time to read much of the fine reporting that has been done on this event. It is something we all should be talking and thinking about – a lot.

Suddenly, Trump Derangement Syndrome is a thing, or is trying to become one.

We’re told by many wise and well-meaning people that it is a huge and even fatal mistake for liberals (and for constitutional conservatives) to respond negatively to every Trump initiative, every Trump policy, and every Trump idea. There are bound to be—in an Administration staffed not by orcs and ogres but for the most part by the usual run of military people and professional politicians—acceptable actions, even admirable initiatives, and we would do ourselves and our country a huge disservice by simply responding to them all with the same reflexive hatred. This may be especially true if that reflexive hatred, however unconsciously, mirrors and mimics the reflexive hatreds of the Trump White House itself. We owe it to our country and to our sanity to go on a case-by-case basis, empirically evaluating each action as it takes place, and refusing to succumb to the urge to turn politics into a series of set responses—exactly the habit, after all, that we so often deplore in Trump and the people around him.

The claim, made in the campaign, that he would supply universal insurance at a low cost, even to those with preëxisting conditions, didn’t even rise to the level of wishful thinking. Wishful thinking involves thought.

This is a perfectly reasonable assertion, and one that would count for a lot in pretty much any semi-normal circumstance. The problem is that it refuses to see, or to entirely register, the actual nature of Trump and his actions. Our problem is not Trump Derangement Syndrome; our problem is Deranged Trump Self-Delusion. This is the habit of willfully substituting, as a motive for Trump’s latest action, a conventional political or geostrategic ambition, rather than recognizing the action as the daily spasm of narcissistic gratification and episodic vanity that it truly is.

The bombing of Syria, for instance, was not a sudden lurch either in the direction of liberal interventionism, à la Bill Clinton in the lands that were once Yugoslavia, nor was it a sudden reassertion of a neo-con version of American power, à la both Bushes in Iraq. It was, as best as anyone can understand, simply a reaction to an image, turned into a self-obsessed lashing out that involved the lives and deaths of many people. It was a detached gesture, unconnected to anything resembling a sequence of other actions, much less an ideology. Nothing followed from it, and no “doctrine” or even a single speech justified it. There is no credible evidence that Trump’s humanity was outraged by the act of poisoning children, only that Trump’s vanity was wounded by the seeming insult to America and, by extension, to him. It may be perfectly true that the failure of the Obama Administration to act sooner in Syria will go down forever, in the historical ledgers, as a reproach against it; or it may be that the wisdom of the Obama Administration in not getting engaged in another futile Middle Eastern folly will go down in its favor. But it is self-deluding to think that Trump’s action was meant to be in any way remedial. It was purely ritual, and the ritual acted out was the interminable Trumpist ritual of lashing out at those who fail to submit, the ritual act of someone whose inner accounting is conducted exclusively in terms of wounds given, worship received, and winnings displayed. (Perhaps his elder daughter, Ivanka, did play some small part in the action, as her brother Eric suggested in an interview, but this is hardly a comfort; the politics of a mad king with a court are no more reassuring than those of a mad king alone.)

Similarly, the current revival of a repeal-and-replace plan for Obamacare is clearly empty of all value, in its promoter’s mind, save that of publicity. …