With thousands of advertisements seen by Americans everyday, and a corporate media that reinforces the needs of Empire, propaganda in the U.S. is more pervasive and effective than ever before.

The manipulation of public opinion through suggestion can be traced back to the father of modern propaganda, Edward Bernays, who discovered that preying on the subconscious mind was the best way to sell products people don’t need, and wars people don’t want.

BBC Documentary: Century Of The Self

“Propaganda is the executive arm of the invisible government.”

The first hour of this documentary focuses on Edward Bernays and the insertion of propaganda in government and the mass culture and the “engineering of consent”. In Germany the Nazi’s quickly learned how to weaponize propaganda and the ideas of Bernays.

In the United States Bernays was also the central figure guiding in the control of government by the corporations through subtle manipulation of consumerism, media control and creating the myth that democracy is dependent upon capitalism. Bernays was the guide to transforming active citizens into passive consumers. He eventually became an adviser to the CIA and the corporate deep state.

This is an important film to watch and understand.

Ms. Bernays talked about her late father’s book Propaganda. Mr. Miller, author of the introduction to a new edition of the book, joined the discussion. It is being re-issued for the first time in over 30 years by IG Publishing. Edward Bernays (1891-1995) was called the father of public relations and political spin. Written in 1928, this was the first book to discuss the manipulation of the masses and democracy through government spin and propaganda. Ms. Bernays described her father as a manipulator and discussed life at home with the man responsible for the ad campaign that in part caused the U.S. to intervene in World War I. Following their remarks, Ms. Bernays and Mr. Miller responded to questions from members of the audience.

Link to Story and 48-Minute Video 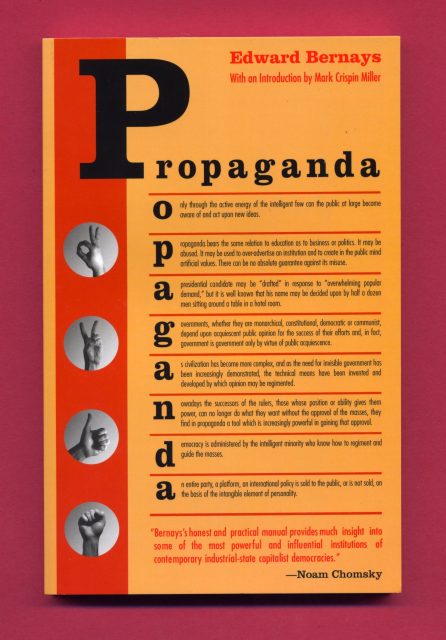 (Commoner Call book cover photo by Mark L. Taylor, 2017. Open source and free to use with link to www.thecommonercall.org )