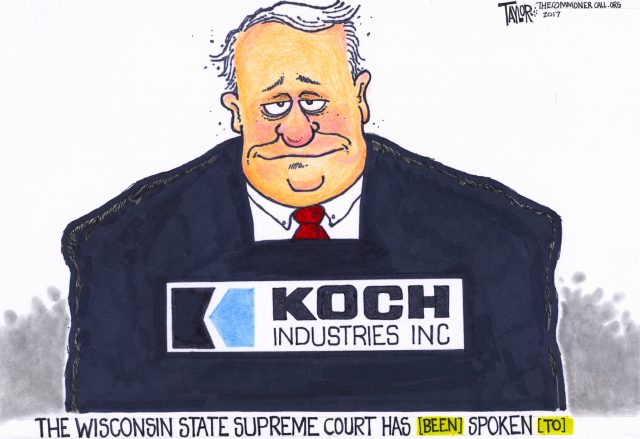 By Dennis Brault
The Commoner Call (4/24/17)
Yes, indeed, the Wisconsin Supreme Court just ruled that your First Amendment right to free speech would be impinged if you couldn’t bribe …err… support with cash, Wisconsin judges. This should come as no surprise, as our state supreme court is the most expensively purchased court in state history. They are, like so many politicians, nothing more than employees of the far right wing Ayn Randian corporate groups funding their campaigns.
The free speech, which isn’t free if it costs money, argument can be fixed by amending the United State Constitution to state that money isn’t protected speech. Move To Amend resolutions recommend doing just that. As a bonus Move To Amend also amends the Constitution to state that corporations, unions and other such artificial constructs, are not people and therefore not entitled to the Constitutional rights bestowed upon American citizens. #MoveToAmend
James Madison warned that one political party seizing all branches of government was the very definition of tyranny. Of course tyranny is the the very situation we find ourselves in today, both here in Wisconsin and nationally. Do we find ourselves in this predicament by accident? I doubt it. More likely we’re so spellbound by the constant repetitive drone of what the popular opinion is, that we don’t recognise our human need to conform and be liked.

“To break free of the incantations, we must loosen the hold that our televisions and phones have over us. Get the screens out of your room and surround yourself with books. The characters in Orwell’s and Bradbury’s books could not do this — but we still can. Make eye contact and small talk with strangers, it is part of being a citizen. Defend American institutions and civil society groups by joining them, advocating for them or even supporting them financially.” — Timothy Snyder, On Tyranny—Twenty Lessons From The Twentieth Century

The Wisconsin Supreme Court threw out a proposal to create formal recusal rules for judges and justices in the state.

The court voted 5-2 Thursday, with Justice Shirley Abrahamson and Justice Ann Walsh Bradley opposed, to dismiss and deny a request to create specific rules for when a judge or justice should be removed from a case because they received campaign donations from a group or individual with a case before the court.

The vote fell along ideological lines, with the court’s conservative-leaning majority voting to throw the petition out and the liberal-leaning wing voting to hold a public hearing on it, or adopt it immediately.

The petition would have applied to all elected judges in the state who serve in municipal court, circuit court, the Court of Appeals or the state Supreme Court.