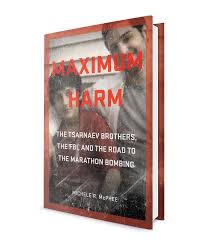 For almost four years, WhoWhatWhy has been a lone voice casting doubt on the FBI’s official narrative of the Boston marathon bombing. Now, investigative journalist and Boston-based ABC news producer Michele McPhee has raised many of the same questions we’ve been asking since two explosions and the subsequent manhunt traumatized New England’s largest metropolitan area.

In her new book, Maximum Harm: The Tsarnaev Brothers, the FBI, and the Road to the Marathon Bombing, McPhee adds weight to WhoWhatWhy’s skepticism that the feds have fully disclosed  their dealings with the Tsarnaevs prior to the 2013 bombing.

The reason: Many in Boston’s local law enforcement don’t buy it either.

McPhee, with deep connections to the rank-and-file of Boston area law enforcement, documents an apparent widespread skepticism among many of the cops who were tasked with confronting the violence and bloodshed that week.

A seasoned crime reporter, McPhee is currently the Boston producer for ABC News In the Brian Ross investigative unit and was formerly the Police Bureau Chief for the New York Daily News where she has covered corruption cases, murders, mobsters and terrorism trials. In Maximum Harm, she uses that experience to lay bare the feds’ interactions with Tamerlan Tsarnaev in the years before the bombing. She comes to some disturbing conclusions.

It’s clear that there are still many unanswered questions and loose threads that federal investigators and the mainstream press, for that matter, seem all too happy to ignore. It’s encouraging to see that many in Boston’s local law enforcement don’t feel the same.

Most shocking of all, McPhee claims that the government played a “direct role in creating the monster that Tamerlan Tsarnaev became.”

In the years since the bombing, WhoWhatWhy has documented a disturbing number of half-truths, reversals, and outright lies that led us to question whether the FBI is telling the truth about what it knew about the Tsarnaevs prior to the bombing.

But the Bureau, as well as most mainstream news outlets, has consistently discouraged any inquiry that goes beyond the question of whether the Tsarnaev brothers were innocent or guilty.

No one doubts that the Tsarnaev brothers were guilty — of something. However, like a judge who refuses to admit evidence into a trial that might unduly influence a jury to consider anything beyond simple guilt or innocence, the FBI seems to be taking great pains to stifle any information that would cause the public to question the role of the feds in the events leading up to the tragedy of April 15, 2013.

Thanks to McPhee’s reporting, it’s now clear that many in Boston’s law enforcement community have the same suspicions.

Law enforcement officials told her that they suspect “Tamerlan was an informant for the feds… [t]hey believe that he was working for the US government, motivated by the promise of citizenship.” McPhee theorizes that because the government kept denying Tamerlan’s citizenship application, he snapped and went on a murderous rampage.

The FBI adamantly maintains it had no idea who the bombing suspects were until older brother Tamerlan was killed in a shootout three days after the bombing. Younger brother Dzhokhar was taken into custody the following day after he was found hiding in a dry-docked boat. He was convicted and sentenced to death in 2015 for his participation in the bombing.

Within hours of the brothers’ identities being made public, their mother told Russian media that the FBI had investigated her son Tamerlan two years before the bombing. The Bureau put out a statement soon after, acknowledging that they had conducted an “assessment” of him in 2011. This was based on a warning from Russia’s Federal security service (known in English by the acronym FSB) that Tamerlan was becoming radicalized.

It didn’t take long for some observers, including WhoWhatWhy, to point out that Tamerlan Tsarnaev fit the exact description of a prototypical FBI “informant,” a role often played by individuals after having been themselves the target of an FBI investigation. With Tamerlan’s involvement in the bombing, the FBI felt enough pressure to put out a press release denying it had ever used Tamerlan as an informant.

Law enforcement officials she spoke with believe that Tamerlan was recruited by the feds as early as 2010 and used as an informant to take down a drug running operation between Boston and Portland, Maine, with international connections. And in a bizarre twist, the pistol allegedly used by the brothers to kill MIT cop Sean Collier traces back to that same drug ring. …

The Federal Bureau of Investigation (FBI) just released previously unseen notes from a 2011 interview with Tamerlan Tsarnaev. The release puts a new wrinkle in the murky backstory of its relationship to the ringleader of the Boston marathon bombing.

Tsarnaev told the agents that four men dressed in suits had previously come looking for him (date not specified). They wanted to “talk to Tamerlan,” the report states. The men, who are described as “young” and “handsome,” identified themselves as FBI agents to someone whose name is redacted in the report.

According to the summary, the four men said they would return the next day, but did not — at least by the time of the interview.

The interview summary, known internally by the FBI as a form 302, adds a new and intriguing piece to the puzzle of when the Bureau first had contact with Tamerlan Tsarnaev.

In an ongoing effort to shed light on the events leading up to the Boston bombing, WhoWhatWhy requested information about the government’s interactions with Tamerlan through the Freedom of Information Act (FOIA) multiple times in various ways. Each time we were denied access.

What is it about the pre-bombing contacts between Tamerlan Tsarnaev, Ibragim Todashev and the Bureau that necessitates all the secrecy and subterfuge we’ve seen since the bombing? Maybe those four mystery men know.

Some of that information, specifically the two-page interview summary, was finally released last week to the FBI’s records vault, a kind of electronic “reading room” reserved for what the government calls “frequently requested records.” It’s not clear why the FBI released the report at this time.

Officially, the FBI maintains that Tamerlan was first brought to the Bureau’s attention by a March 2011 Russian “warning” about his possible radicalization. As a result of this warning, he was interviewed by a counterterrorism agent (CT Agent) as part of an “assessment.”

The newly released 302 summary is presumably the record of that interview, conducted roughly six weeks after Russia’s tip. The assessment was closed about a month later.

The Bureau claims it sought more information from the Russians but did not receive any response.

The way the report is written invites speculation about Tamerlan’s Russian connection.

“The men said they would be back ‘the next day’ but did not return. [Redacted] and TAMERLAN have not heard from them since. TAMERLAN doesn’t know anyone who may be upset with him.”

“TAMERLAN has never had any problems with Russians in the US due to his Chechen heritage… Putin and Medvedev are the problem not the Russian people. TAMERLAN has had Russian friends in the US,” the report reads.

Although no definitive conclusions can be drawn from these two paragraphs, it does appear that the “problems with Russians” was the topic that brought the mystery men to Tamerlan’s door.

It’s not clear from the summary whether the agents who wrote the report initiated contact or whether Tsarnaev called the Bureau because he thought they were looking for him.

The summary does not reveal whether the Bureau knows who the mystery men were and, predictably, the FBI is staying mum. A spokesperson told the Daily Beast somewhat cryptically that the Bureau is letting “the document speak for itself.”

Were the the four men agents from another FBI division, or from another intelligence agency? Or were they imposters? We don’t know. But in light of new revelations that many in Boston’s local law enforcement community think Tamerlan Tsarnaev played the role of an informant for the FBI, the document speaks volumes. …