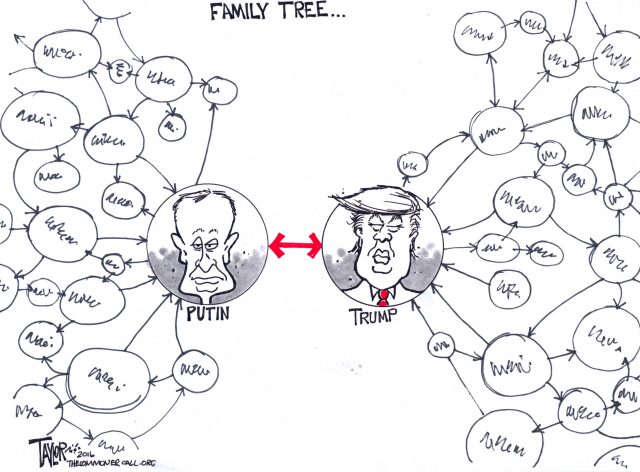 “If you think something is coincidence, you are not paying attention.”

By Dan Peak
The Commoner Call (3/23/17)
Dear Fellow Readers,
I read the Commoner Call every day and I have appreciated the new approach of bringing focus to an issue, it offers both a wider perspective and more depth to a topic.
I’m sure you’ve noticed the recurring focus on Russia.  Commoner Call editor Mark Taylor and I have shared thoughts on this for a number of months.  I had this idea, “The Russia Monitor” as a category of the Commoner Call to bring ongoing focus and order given the ever-changing newsworthiness of the topic.
Why do I suggest The Russia Monitor?  I believe our Democracy is at risk.  The recent Commoner Call articles on gaslighting helped highlight both the risk and the attack; simply wear people down so resistance fades and we give up.  On Monday when I read about FBI Director Comey’s testimony before the House Intelligence Committee I felt like on that day Democracy won.  For that day.
I suggest The Russia Monitor as a venue for pertinent news and events.  It is not a lawyerly case, it is not a comprehensive investigative case, it is a collection of events vetted as best possible through reliable news outlets.  If this was a movie you could imagine the white board or wall space taken up with the names/pictures/connections of the various people involved and implicated.  Michael Flynn, now Trump’s former National Security Adviser, would appear linked to Trump, Pence, Russian Ambassador Sergey Kislyak, long time Trump advisor Roger Stone and many others – his picture might now appear with a red X through it if this were entertainment.
Did Russia hack and interfere with the US election – Yes, this is reasonably established.  Not simply the campaign for Hillary Clinton but information about hundreds of other Democratic candidates for office.  Do we know why Russia hacked the US election? Yes if you accept Putin’s own words and opinions of experts: any disruption of Western democracy is good for Russia and their balance of power or global influence as a world power.  Was Putin personally involved? Yes, a reasonable case has been made that the ex-head of the KGB set priority and could easily have shut down any initiative if warranted.
Were votes hacked – According to the National Security Agency, no.

Given the stakes we need to pay attention … and dig

What We Have Learned This Week:

Again, so what?
Let’s add a few more items to our investigative wall and we’ll see over time if they connect…
Russian Banking in Cyprus
Cyprus is a haven for laundering of Russian money.  The people most hurt by the crash of the Cypriot banks in 2012 were not just the Cypriots but also the Russian clients.  If you vacation in Cyprus you’ll feel like you’re on the Black Sea.  Keep in mind, it is illegal for Russians to have money in Cypriot banks (or any offshore banks) but the state allows citizens in good standing (oligarchs) to take some money out of the country as a nest egg but this can and will be used against you as a crime should your political standing in Russia change.
One such bank is Bank of Cyprus and new ownership includes Wilbur Ross, now Trump’s Commerce Secretary.  What motivation does Trump Commerce Secretary Wilbur Ross have for investing in Bank of Cyprus?  Ross had no prior experience in banking but the party line is he found a deal he couldn’t turn down, cleared the board of Russian oligarchs and brought in a highly qualified person as chairman of the bank.  The new chairman had left Deutsche Bank after a stint that included the bank paying $20 billion in fines of which $650 million was specific to laundering of Russian money through Deutsche Bank offices in New York, Moscow and Cyprus.  We are sold the notion that these are highly intelligent, highly successful, thus very wealthy people and yet why would any reasonable person but into a bank in Cyprus, hire a chairman with banking history of money laundering or given that history appoint this person to a US cabinet position.  Simply another coincidence? Who knows, read about it for yourself, HERE.
One could say, Mike Flynn – done and dusted.  Rex Tillerson – oil business, has to have ties to Russia.  But Mannafort, Kushner, Ross, Sessions, Rosneft, Kislyak, Stone, Page, Assange, Alfa Bank, Donald Trump Jr., RT and on and on – drip, drip, drip.
The Russia Monitor in The Daily Call will keep you up to date on the latest.