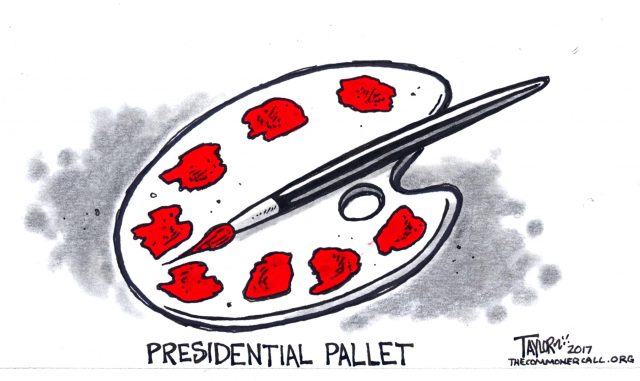 In what feels like a surreal stab at redemption, George Bush is back and being feted for his newest, guileless, bloodstained and evidently entirely unironic painting project: A book and exhibit of his Forrest-Gumpish portraits of 98 men and women blown apart, broken down, rendered limbless and otherwise shattered by his immoral, inept wars in Iraq and Afghanistan. The newly released Portraits of Courage: A Commander in Chief’s Tribute to America’s Warriors  consists of 66 single images  and a group mural of physically and/or mentally wounded veterans from all the Armed Forces. Each portrait – safely painted from photographs, not in grisly person – is accompanied by upbeat stories from Bush about his victims’ crippling war injuries, subsequent struggles, and admirable recoveries thanks to bike-riding and playing golf with him.

Since its release last week in two editions – $35 hardcover and $250 cloth-bound “deluxe” signed by the artist – Portraits has reportedly climbed to #1 on Amazon’s book list. Proceeds will go to the George W. Bush Center’s Military Service Initiative in Dallas, aimed at helping wounded veterans to heal; the Center’s museum is also hosting an exhibit of the paintings. In a freakishly deadpan interview, W says the “greatest honor of the presidency was looking (veterans) in the eye and saluting them as their commander in chief.” Now, he says, “I believe as a society we owe them a lot. And I want to be in the lead.” Poignantly, many of the prosthetic-wearing and traumatized veterans in the book respond in kind: Seeing the paintings, they say, they feel “humbled” and “in awe”; one says he has “no words,” which we can relate to.

“Idiocy in art has its charms,” notes one critic. “In the man who ran the free world into bloodstained buffers, those charms quickly sour.”

Given that many right-minded souls consider Bush a clown, pawn, cowboy, war criminal and blood-soaked decider-in-chief whose lies and errors in judgment continue to reverberate for thousands of innocent victims at home and around the world, his foray into painting, “that gentle, civilized art,” has met with mixed reviews  – especially now that he’s taken as his subject those he haplessly sent into harm’s way, and who returned, unsurprisingly, deeply harmed. Some view his clumsy re-emergence as “an adorable totem in the rearview mirror,” and the duty to be “nice about the family idiot’s latest art project,” with tolerance and therapeutic curiosity. Others argue that while that he’s moved beyond his early “empty-headed daubs,” W’s monstrous legacy means he will never, unlike his role model Churchill, “earn his pleasures.” “Idiocy in art has its charms,” notes one critic. “In the man who ran the free world into bloodstained buffers, those charms quickly sour.”

Still, the weirdness of the “misunderestimated” Bush’s latest endeavor, part of a continuing effort to “paint over his legacy as a war criminal,” somewhat pales before a current Trumpian madness that helps make all evil feel relative. W used to be known as the worst US president ever; now, who knows what havoc the Angry Cheeto will wreak? In truth, the ongoing degradation of our political leadership leaves many of us flummoxed. Asks The New Yorker of a ruinously inept president who nonetheless “looms small in memory…Having obliviously made murderous errors, Bush now obliviously atones for them. What do you do with someone like that?” In the end, maybe, turn to the brutal charms of The Onion, which earlier documented the efforts of the “Picasso in Chief,” haunted by the omnipresent ghost of an Iraqi child.