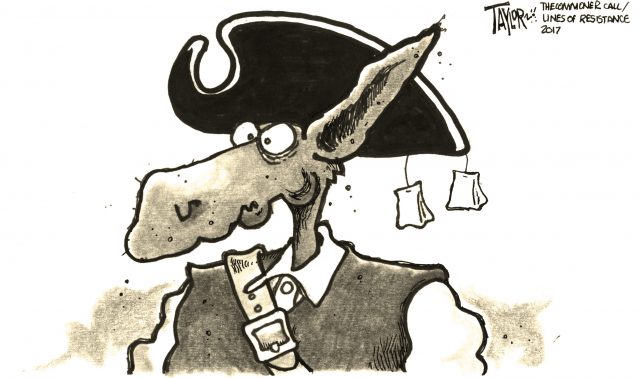 (The Commoner Call & Lines of Resistance cartoon by Mark L. Taylor, 2017. Open source anc freee to use with link to www.thecommonercall.org )

They came with chants and songs, banners and flyers and a chicken costume, and felt it was working – that this and other grassroots protests were steeling Democratic resistance to Donald Trump.

“We need to stand and fight. We are the majority. Let’s take our country back,” Mimi Fleischman told the crowd outside Senator Dianne Feinstein’s Los Angeles office on Tuesday afternoon.

It was the latest anti-Trump gathering to target congressional Democrats for perceived pusillanimity towards Trump’s embryonic, whirlwind administration.

About 200 protestors had picketed Feinstein’s house in San Francisco after she had voted for four of the president’s cabinet nominees. Then on Tuesday morning the California senator, the ranking Democrat on the Senate judiciary committee, announced she would oppose the nomination of Jeff Sessions as US attorney general.

“The pressure is working,” said Daniel Lee, 43, an actor and writer.

One rally speaker, Laura Smith, said congressional Democrats should imitate the blanket opposition their Republican colleagues waged against Barack Obama. “I hated that obstructionism but you know what, it frickin’ worked.”

Activists said they were studying tactics used by the Tea Party, a grassroots movement which yanked the GOP to the right and hardened congressional resistance to Obama. Some have called it the Herbal Tea Party.

“As a mobilisation group the Tea Party was very successful. We’ve taken a page from that,” said Viviana Fefferman, 65, a retired insurance worker.

She was part of Indivisible of Sherman Oaks, a newly formed group which takes its name from Indivisible: A Practical Guide for Resisting the Trump Agenda, a 23-page document written by congressional staffers who experienced the Tea Party’s impact.

Some speakers appropriated the radical right’s claim to represent US values. …