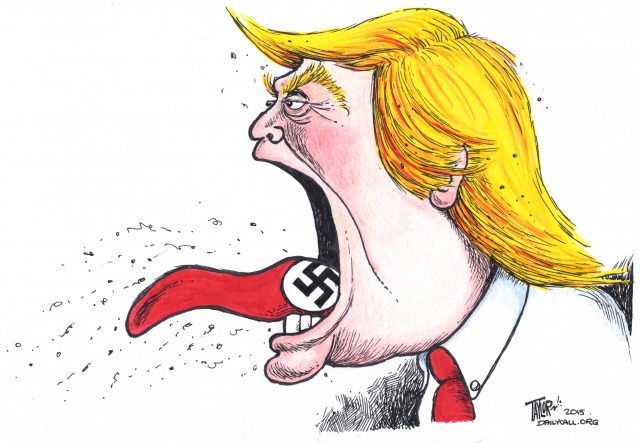 (The Commoner Call & Lines of Resistance cartoon by Mark L. Taylor, 2017. Open source and free to use with link to www.thecommonercall.org )

If you were looking for Trump to take the high ground in his Inaugural Address and call on “the better angels of ourselves,” you were kidding yourself.

It was hard to listen to Trump’s Inaugural Address without hearing some not-so-faint echoes of fascism.

The most obvious was his invocation of “America First” as the “new vision” that “will govern our land.” But it’s not a new vision or a new name. In fact, “America First” was the name of the isolationist and anti-Semitic organization in the 1930s that wanted to accommodate Nazi Germany.

But there were other echoes as well.

His insistence that “the bedrock of our politics will be a total allegiance to the United States” was, to say the least, disquieting—especially the adjective “total.” And he followed that up with a demand for loyalty: “Through our loyalty to our country, we will rediscover our loyalty to each other.”

He stressed “unity” and quoted a passage from the Bible that said, “How good and pleasant it is when God’s people live together in unity.”

And he used the emphasis on unity as a way to give a veiled warning that he might not tolerate boisterous dissent: “We must speak our minds openly, debate our disagreements honestly, but always pursue solidarity.” (The “but” was the tipoff here, and by “solidarity” he did not mean linking arms with labor activists, for instance. He meant loyalty to country, and since he identifies himself with the country, he meant loyalty to him as President.)

Another fascist echo was in his celebration of the “man of action,” which was a Mussolini trademark. Here’s how Trump introduced it. First, he repeated his gratuitous slap at Representative John Lewis (though Trump didn’t mention him by name this time): “We will no longer accept politicians who are all talk and no action.” And he used this put-down as a prompt to say: “Now arrives the hour of action.”

His language of a new beginning, “right here, and right now,” which he used twice, also evoked the idea that he was ushering in something totally different, and that everything that has come before him was somehow less grand than what he is about to deliver. He didn’t even nod to Washington or to Jefferson or to Lincoln; he made no mention of FDR, JFK, or Reagan. It was as if he was starting history anew, which is a classic fascist trope.

Like Twentieth Century fascists, he extolled the nation’s “glorious destiny.” He saluted “the great men and women of our military and law enforcement.”

And then he invoked the divine will. “Most importantly,” he said, “we are protected by God.”

And let’s not forget that his campaign slogan and the coda to his inaugural address, “Make America great again,” itself strikes a Fascist chord: nostalgia for national greatness, mixed with grievances (that can lead to scapegoating) about who is to blame for the loss of such greatness.

If you were looking for Trump to take the high ground in his Inaugural Address and call on “the better angels of ourselves,” you were kidding yourself.

That is not who he is. He is Trumpolini.

The Bill of Rights