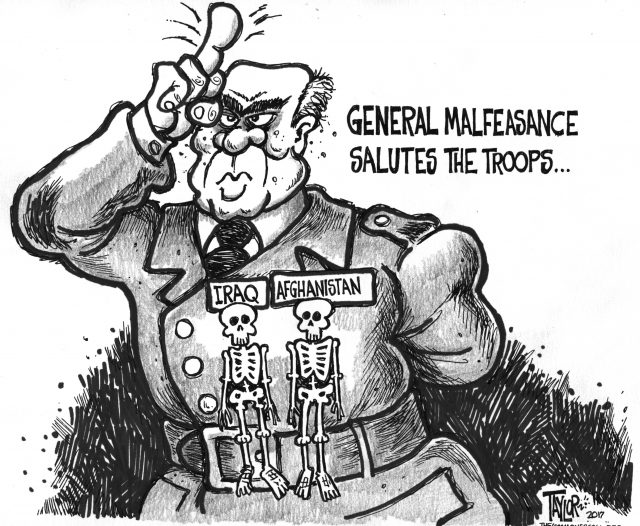 The War Dept can’t account for trillions. Yet we are told there isn’t enough money to care for citizens. We have the resources, they are just in the wrong hands.

[Editor’s Note: This story barely made nary a ripple in the mainstream corporate press, which — of course — gobbles down multiple billions in war industry advertising dollars. This scandal is a real opportunity for the democrats in the House, but will they hold meaningful hearings? — Mark L. Taylor]

WASHINGTON — Despite being legally required to conduct audits since the early 90s and holding a staggering  2.2 trillion in assets, the Pentagon held its first-ever audit this week — which it, unsurprisingly, spectacularly failed.

According to a senior official, the results were so bad that the discrepancies could take “years [to] resolve.” The Department of Defense is handed hundreds of billions of dollars annually — most of which comes from taxpayers.

In a press conference akin to a sketch from a comedy show, Deputy Secretary of Defense Patrick Shanahan asked, “So you guys know why I came down here today?” To which a reporter replied, “To see if we ate donuts?”

Shanahan then casually informed reporters that the notoriously bloated and unchecked Department of Defense had failed its first audit in the Department’s increasingly expansive 71-year history: “We failed the audit but we never expected to pass it.”

Throughout its long unaudited history, the DoD has a notorious record of irresponsible and downright wasteful spending.

At the launch of the audit, which began last week, Pentagon spokesperson Dana W. White proclaimed that it “demonstrates our commitment to fiscal responsibility and maximizing the value of every taxpayer dollar that is entrusted to us.”

According to a statement from the Pentagon, the goal of the audit was to reinforce “taxpayer confidence” that their money is spent responsibly. According to figures from the Pew Research Center, only 18 percent of Americans trust that Washington does what is right “all of the time.”

Twelve hundred auditors sifted through financial records spanning the DoD’s massive omnipresence. To put it into perspective, the audit looked at spending on weapons systems, military personnel, and general property — each of which is a broad category for vast amounts of annual spending.

The Pentagon certainly has some explaining to do.

Earlier this year, the Pentagon announced that $21 trillion of taxpayer money had simply disappeared. The announcement attributed the missing funds to the DoD’s failure to conduct audit trails in sufficient detail.

Throughout its long unaudited history, the DoD has a notorious record of irresponsible and downright wasteful spending.

Over the past few months, it’s come to light that the DoD has flushed $14,000 (each) on 3D-printed pentagon-shaped toilet seat lids and guzzled cups for $1,280 apiece. …